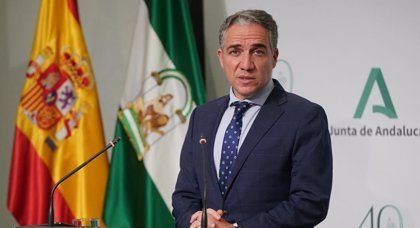 Junta De Andalucia Demands An Explanation Over The Arrival Of 200 Immigrants. image: Twitter

The Junta de Andalucia today, Wednesday, December 9, has asked for an official explanation from the central government, about the arrival of almost 200 immigrants into Andalucia, on a flight from Gran Canaria yesterday, apparently without any prior warning.
Elías Bendodo, the counselor of the Public Administration and Interior, and spokesman for the Executive, in a press conference, accused the government of “not complying” with the current rules on coronavirus, saying that he had asked Sandra García, from the Government Delegation in Andalusia, personally, both in writing and by telephone, for “transparency and information”, accusing them of “not acting with loyalty” on the matter.
Bendodo continued, “The Government is not warning us of these transfers, which it had previously denied”, and, referring to the current travel ban, where people can only travel when it is justified, he said he was sure the case of transferring these immigrants was not justified, and that the government is “not complying with the regulations” to enter Andalucia, saying also that no proof has been shown that the immigrants even had the mandatory PCR test or if they are subject to health controls.
Sergio Romero, of the Ciudadanos party, suggested that Fernando Grande-Marlaska, the Minister of the Interior, should resign after he has shown “frivolity, disloyalty and a lack of heart”, but that first he should issue a full explanation of his actions and decision to transfer the immigrants to Andalucia without any warning, saying, “Many immigrants, some 200, who now do not know where they are, have been left helpless and abandoned to their fate”, adding Marlaska should, “give his explanations and then go home, because he does not have the required skills for his job”.
_________________________________________________
Thank you for taking the time to read this news article “FOURTEEN cars burn in different streets of Fuengirola”.
For more UK daily news, Spanish daily news, and Global news stories, visit the Euro Weekly News home page.