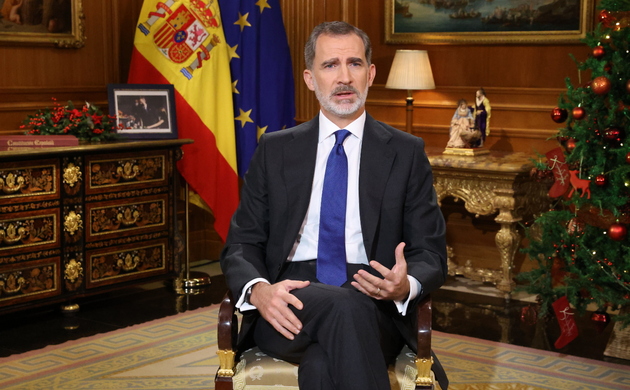 IN the traditional Christmas Eve speech tonight, December 24, King Felipe VI focused on the unprecedented crisis which has hit Spain this year, and also mentioned ethical values, which he said, come above anything else, even personal or family situations.

He began his speech by highlighting that 2020 has been a “hard and difficult year” in which coronavirus has “altered our way of life” and “paralysed our economy”. He also sent his support and affection to families who have been affected by the virus and to patients still fighting against it at home or in hospital.

He also tried to raise optimism that 2021 will be better, saying that in the past Spain has been capable of overcoming hardship, and that this time wasn’t going to be any different.

He showed his appreciation for science and research being carried out to fight the virus and asked for everyone to be responsible, as it is “one of the most effective weapons for combating the virus”, which is why it is “so important for us to not let our guard down”, he said.

Felipe VI thanked health care professionals once more for their professionalism and humanity and for continuing to fight for us all.

“Another big problem and challenge is the financial crisis and avoiding, above all, it becoming a social crisis” the King said, “everybody matters a lot” he said, adding that people should be the State’s main concern, especially the young.

He asked for unity, pointing out the Spain is a strong and solid State and adding that the pandemic has shown aspects which needs to be improved upon, but also “our strengths as a State”.

While thanking the armed and security forces for their work, he also spoke of the Constitution, as a guarantee of democracy in the face of the uncertainty caused by the pandemic.

Towards the end of his message, King Felipe VI spoke of the years he has been on the throne and made it clear that moral and ethical principles are for everyone without exception and are above any personal or family situations.

He ended with a message of hope, saying that it will not be easy to overcome this situation, but “I am sure we will get through it”, he concluded, adding that “as King, I will be there with everyone and for everyone, not only because it’s my duty and my conviction, but also because it is my commitment to all of you, to Spain”.