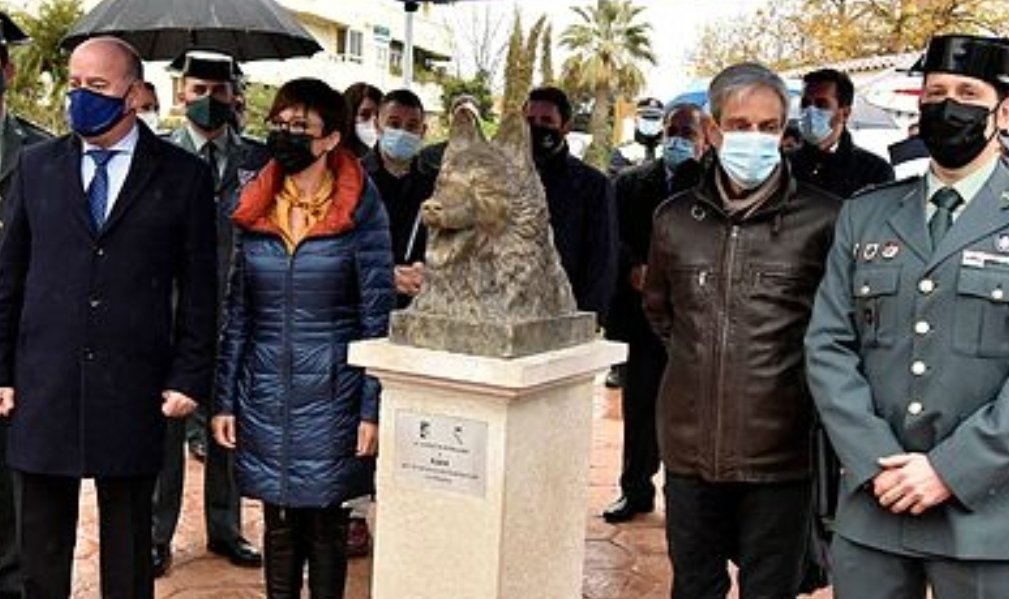 AUTHORITIES in Antequera, Malaga have unveiled a statue which pays tribute to Ajax, the Guardia Civil dog who prevented a terrorist attack.

The statue is located at the new urban park opposite the Jardines de la Negrita.
The German Shepherd had received several awards for preventing a terrorist attack in 2009 and died in 2013 in Antequera. He had worked protecting Spain’s top politicians and the Royal Family.
The event was attended by the General Director of the Guardia Civil, Maria Gamez, and the local mayor, Manuel Baron, as well as local Guardia Civil Juan Carlos Alabarces, who was the dog’s instructor while he was active and adopted him when he retired. There were several other local authorities and relevant members of the Guardia Civil present at the event.
The statue of the dog’s head has been made in local limestone by stonemason Antonio Garcia.
Maria Gamez called the event “a tribute to the dog that has probably had the most importance and relevance in the work of the Guardia Civil since the force has had this invaluable help for various actions, which has helped us to save people’s lives, prevent security problems and, in short, to guarantee the freedom and security of everyone”.
In her speech, she had words for Sergeant Juan Carlos Alabarces, because “without a doubt it was the perfect pairing, the communion between the guide and the dog.” She also highlighted the occasion on which “they prevented a possible second attack, probably with fatalities, in Palmanova in 2009.”
The mayor of Antequera, Manuel Baron, said “I am very proud that our city honours the memory of a dog that saved lives, who worked like the best of the Guardia Civil, with honour and dedication.”
Juan Carlos Alabarces remembered his partner for many years and stressed “the immediate connection” with Ajax. “More than a dog, he symbolised sacrifice, effort and tenacity in the fight against terrorism by the Guardia Civil.”
On the day of the Palmanova attack, two Guardia Civil officers were killed by the explosion of the first car bomb. The second bomb was found by Ajax and deactivated, saving many lives, as it was planted in an area full of tourists in mid-summer.
As his handler said, Ajax may not have been the best police dog ever, but his actions have caused him to go down in history and show just how important his colleagues, both canine and human, are to our safety.