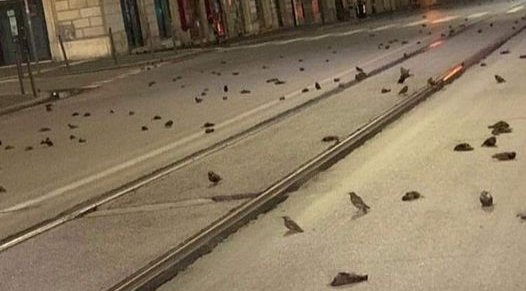 Hundreds of dead birds that littered a Rome street on New Year’s Eve were ‘scared to death’ by fireworks despite a ban, claim animal rights campaigners.

FOOTAGE of the area near the city’s main train station, Roma Termini, showed the bodies of birds, mostly starlings, lying on the ground.

The International Organisation for the Protection of Animals (IOPA) said it was likely caused by fireworks and firecrackers, and branded it a “massacre”.

A ban had previously been enforced in the city to protect people, animals and heritage sights.

The cause of the deaths has not yet been officially confirmed, but the IOPA said firecrackers and fireworks had been let off in a nearby neighbourhood used by birds to roost.

“It can be that they died from fear,” said spokeswoman Loredana Diglio.

She said they can fly up together and knock against each other, or hit windows or electric power lines, but “they can also die of heart attacks”.

The Royal Society for the Protection of Birds (RSPB) said that while there is little evidence fireworks harm wild birds or affect their conservation status, it confirmed setting off fireworks close to nesting and roosting birds can cause disturbance..

The organisation said it will continue to monitor the situation.

Shocked social media users questioned the legitimacy of the photograph on Facebook, but OIPA International responded: “This is not, unfortunately, a bad photoshop as the death of any animal is not something you can make joke of it.

“Yes, this happens every year in many other countries and cities of the world, that’s why we all must raise awareness.”