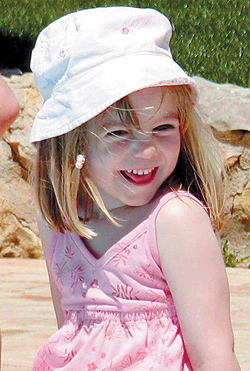 The McCanns have been searching for the truth of Madeline's disappearance since 2007 - Image Source: FindMadeline.com

THE PARENTS of Madeline McCann have released a New Year’s message expressing their hope of finding the truth about their long lost daughter’s disappearence.

Gerry and Kate McCann, whose daughter Madeline tragically disappeared from a Portuguese holiday resort in May 2007, have released a statement expressing their hope that their daughter’s remains will one day be found.

The Leicestershire couple posted on the official Find Madeline website to offer their sympathy to all those who suffered during 2020, a year “we don’t want to remember but will find it hard to forget.”

They said the pandemic year “has been tough for most people, and often distressing, with so much loss, worry, and isolation.”

“Despite losing a parent each, we are aware we have been more fortunate than many, with our family unit at home and jobs to go to,” they said.

On the subject of the long-running probe into the disappearance of their young daughter, they said “the investigation to find Madeleine has been forced to slow down as a result of the pandemic. It hasn’t stopped however and the hope, energy, and determination to find her and uncover the truth remain steadfast.”

“We are very grateful for the continued support, especially throughout this ‘rubbish’ year and for all the Christmas wishes too”

Madeleine McCann was abducted from her bedroom in an Algarve hotel in May 2007, leading to one of the most exhaustive and high profile investigations in recent memory.

A 43-year-old German sex offender – referred to as Christian B in the media – was identified as a suspect in the Madeleine investigation last June in a rare breakthrough on the tragic case. Scotland Yard detectives have been working closely with their Portuguese and German counterparts to close the case that has haunted the public, and the McCanns, for nearly 14 years.