The Simpson’s Predict A Bleak 2021 For The World 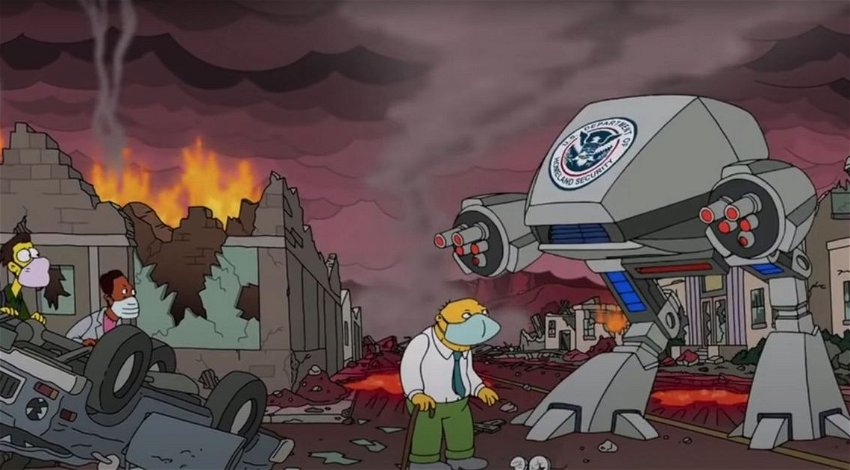 FAMED for predicting the future, The Simpson’s predict a bleak 2021 for the world, according to its 31st Halloween special, Treehouse of Horror XXXI.

The Simpson’s are said to have predicted the attack on the Twin Towers of 2001, the 2008 US presidential vote in which Barack Obama prevailed over John McCain, the election of Donald Trump as US president and the coronavirus pandemic.

Fans of the show eagerly look for clues on what is to come in the world and the show is also said to have predicted other cases that linked figures of music and sports such as the presentation of Lady Gaga in the Super Bowl or the injury of Neymar in the 2014 World Cup in Brazil.

In the Treehouse of Horror XXXI, which corresponds to season 32, the episode is about the US elections – which shows campaign signs which read “Biden Harris”, “Trump Putin” and “Elect Someone Anyone” – and you can see Homer Simpson fall asleep and forget to vote on November 3.

On Inauguration Day, January 20, the same date that many users of social networks linked with the inauguration of Joe Biden, the president-elect, Springfield has become an apocalyptic wasteland.

Robots fill the town, buildings are on fire and Homer is wearing armour while holding a rifle.

“That’s what I get for voting for Kanye!” Hans Moleman shouts as a robot forces him through the air while Lenny and Carl watch in astonishment, hidden behind a destroyed vehicle as the city is consumed by flames.

Fires are seen throughout the streets of Springfield and a group of machines go through the neighbourhood to annihilate any survivors while all the characters continue to wear their COVID face masks.

At the end of the epsiode, four flags are seen reading: “Pestilence”, “Famine”, “War”, and “Treehouse of Horror XXXI”.

We shall soon see whether the show’s prediction comes true.

Thank you for taking the time to read this news article “The Simpson’s Predict A Bleak 2021 For The World”. For more UK daily news, Spanish daily news and Global news stories, visit the Euro Weekly News home page.