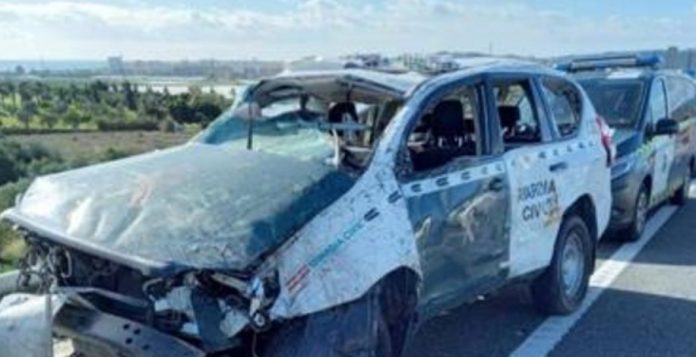 A Brit, 28, has been jailed without bail after allegedly ramming a police car and injuring three officers in Velez-Malaga.
KNOWN as Benjamin MM, the Briton was pursued by police from Motril over the theft of a food van he was driving before trying to run them off the road.
He has been charged with causing injury in an attack on an officer, crimes against road safety and theft of a motor vehicle, and the head of the investigating court number 2 of Vélez-Málaga has ordered the entry into provisional prison without bail after his arrest last week.
According to sources, the defendant drove at “high speed” from the province of Granada to Malaga before police caught up with him at KM 277 on the A7 near the Baviera Golf urbanisation in Velez-Malaga on Thursday, December 31.
He allegedly rammed the police, causing the vehicle to spin and cross the mid-sector barrier into the opposite lane. The van also overturned.
The officers suffered injuries of varying severity, with 40-year-old officer having to be airlifted to the Regional Hospital of Malaga in a serious condition.
The driver of the van, who was also injured, tried to flee the scene on foot and resisted arrest, injuring two officers from another patrol who needed medical treatment at Rincon Clinic.
The other officers in the rammed car – including two 25-year-old trainees – were taken to the Axarquia Regional Hospital where they remained in the Emergency Observation room all day.