Grandad attacked with saw as he slept by masked burlgars

A grandad was repeatedly punched, kicked and cut with a saw after being attacked while he slept in his own bed by masked burlgars.

THE 65-year-old victim agreed to release images of some of his injuries as West Midlands Police appeal for help in tracking down those responsible for the attack in Kingstanding.

The man was struck with the saw and suffered a fractured breastbone, and cuts across his body, after two robbers forced their way into his home.

They fled with cash and despite extensive inquiries, police are still hunting those who were behind the attack in Dormington Road at around 3am on December 1.

The victim – who does not want to be named – required treatment in hospital for several days and is still recovering from his injuries almost five weeks on.

DC Richard Marsh, from force CID, said: “This was a horrible ordeal for the victim in a place he should have felt the safest. There’s not only the physical injuries, but the emotional distress this has caused.

“Although the men were masked we believe they were both white, in their early 20s, and had Birmingham accents. I would urge them to consider what they’ve done, then do the right thing and come forward. 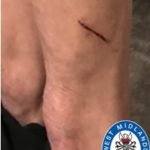 “I’m sure they will have confided in others, having come into some money, and we also need you to have a conscious and contact us.”

Anyone with information is asked to contact West Midlands Police via Live Chat, or by calling 101, and quoting 20BW/297011U/20.

Thank you for taking the time to read this news article “Grandad attacked with saw as he slept by masked burlgars”. For more UK daily news, Spanish daily news and Global news stories, visit the Euro Weekly News home page.