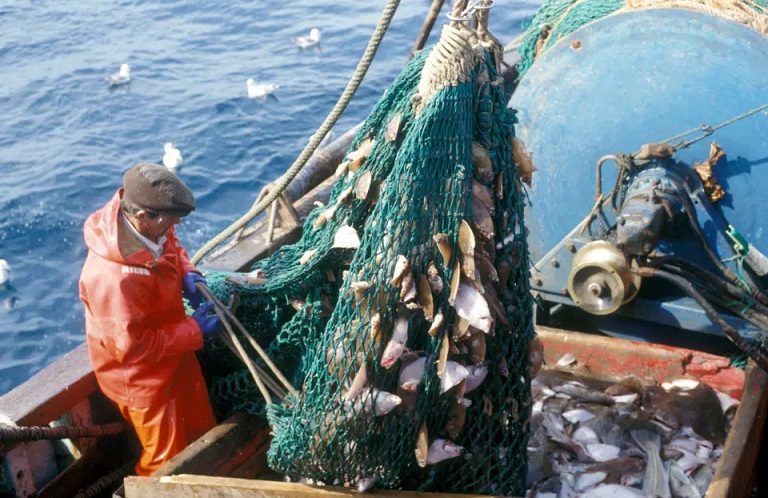 IRELAND’s fishermen are being denied the right to catch fish in their own waters as a result of the EU’s trade deal with the UK, a fishing boss has said. Patrick Murphy, a former Irish diplomat, has said the comments suggested the penny was starting to drop in terms of the damage the EU’s common fisheries policy (CFP) was causing to his country’s fishing industry.

Murphy was reacting to the agreement unveiled by UK Prime Minister Boris Johnson and European Commission President Ursula von der Leyen on Christmas Eve. Negotiations went down to the wire to find an agreement on fisheries, with the two sides locked in talks in Brussels working “line by line and fish by fish”, an EU official said.

Ultimately, the EU agreed to cede 25 per cent of the value of the roughly €650 million in fish EU boats catch in British waters each year, for a period of 5.5 years.

What is included in the fishing deal

The deal runs to more than 1,200 pages, with a whole section and several annexes dedicated to fisheries. Both sides have agreed that 25% of EU boats’ fishing rights in UK waters will be transferred to the UK fishing fleet over a period of five years.

This is known as the “adjustment period”, giving EU fleets time to get used to the new arrangements. The EU wanted it to be longer, the UK wanted it to be shorter – it looks like they’ve met somewhere in the middle, with an end date of 30 June 2026. Under plans outlined in the deal, EU fishing quota in UK waters will be reduced by 15% in the first year and 2.5 percentage points each year after.

By 2026, it’s estimated that UK boats will have access to an extra £145m of fishing quota every year. In 2019, British vessels caught 502,000 tonnes of fish, worth around £850m, inside UK waters. The document also sets out details of how each species of fish will be shared out between the UK and the EU during the transition.

The UK fleet can expect increases in quota for 57 out of the 90 types of fish caught in UK waters every year. But quota shares for some species like Channel cod, of which EU boats (mainly from France) catch more than 90% each year, will remain unchanged.