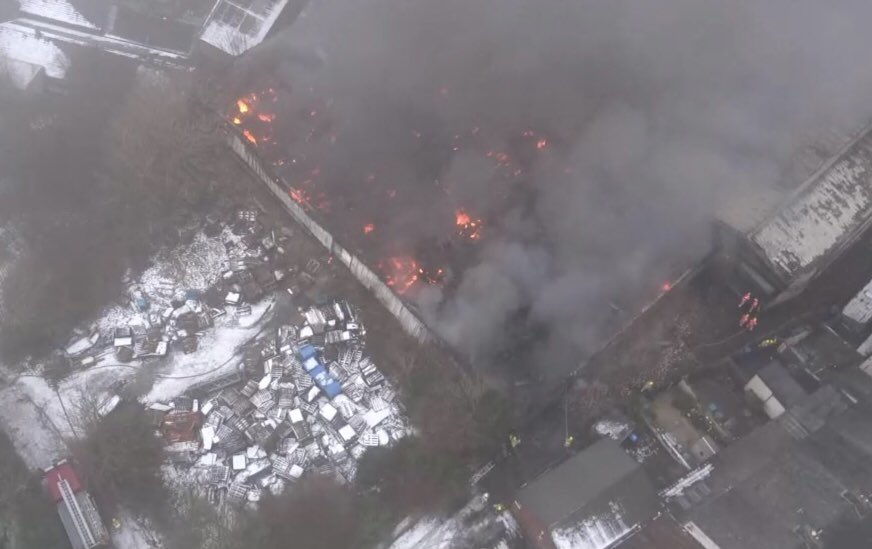 14 FIRE crews tackle a huge fire which has broken out the J H Birtwistle Mill on Jubilee Road in Haslingden, East Lancashire as homes are evacuated.

Roads have been closed off as emergency services tackle the blaze, which involves a 200m by 90m commercial building, with an aerial ladder platform, eight jets and a stinger appliance.

The Grane Road and surrounding access routes in the area have been closed off for the foreseeable and some people living in the immediate area have been evacuated from their home.

Lancashire Fire and Rescue put out a statement: “At 12.31 pm, fire crews were called to a commercial building on Jubilee Road in Haslingden.

“The fire was well developed and a further eleven fire engines were requested to assist with firefighting operations.

“There are currently 14 fire engines from Rawtenstall, Great Harwood, Bacup, Darwen and Fulwood, as well as seven fire engines from Greater Manchester Fire and Rescue Service, in attendance including an aerial ladder platform and stinger appliance. Firefighters are tackling the fire using eight jets and a ground monitor.

“Due to the large smoke plume being produced by the fire residents living close by are being advised to close their windows and doors as a precaution.”

In an update nearly three hours later, they said: “Firefighting is still ongoing. The incident had now been sectorised. High volume pump, hose layer and a scorpion appliance from GMFRS are in use. Approximately 30 domestic properties have been evacuated as a precaution and have been given temporary accommodation. There is still a significant amount of smoke being produced by the fire at this time.”

A police spokesman confirmed that the Grane Road had been closed off, saying: “We are currently dealing with a large fire at the bottom of the Grane Road near the A56 and Grane Road is currently closed off. Avoid this area if you can and we will let you know as soon as we can re-open it. Please let others know to avoid it if they are likely to use the road.”

A user on Twitter posted a video of the scene, stating: “[It] looks massive. Whole areas going dark.”