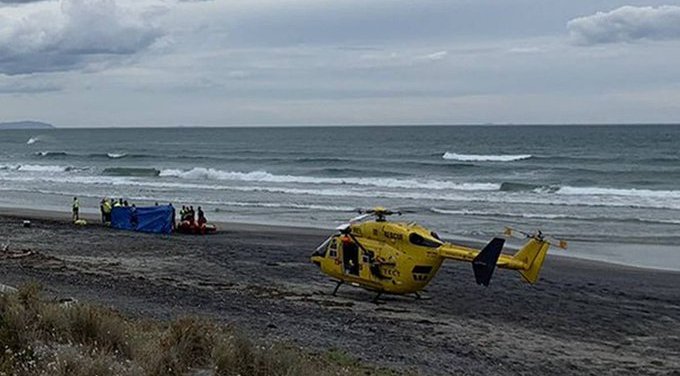 A woman has died after being mauled by a shark in the first fatal attack at Waihī Beach in the Bay of Plenty, New Zealand, in 145 years.

EMERGENCY services were called to the beach at around 5.10pm on Wednesday, January 6, after the woman was injured in the water, suspected to be a shark attack.

It is understood the woman was dragged from the water alive and paramedics administered CPR on the beach to no avail and the woman died at the scene.

Two ambulances and a rescue helicopter were despatched.

Westpac Rescue Helicopters confirmed they were also called to a shark attack at Waihī Beach but were stood down.

The victim was believed to have had bite wounds to at least one of her legs.

A St John Ambulance source told 1 NEWS the woman was in her 20s, while a member of the public said the Coastguard advised everyone at the beach to get out of the water after the death.

The beach is a magnet for tourists, with its population swelling at this time of year from about 4000 people up to about 20,000.

Webber has lived in the Bay of Plenty area permanently since 1998 and can’t ever remember a shark attack in the region.

“When these things happen your thoughts immediately go to the family, and particularly the responders, the coastguard, the ambulance, air rescue helicopter, who had to attend. You really feel for them.”

“Tragedy has struck our community at Waihī Beach where a woman died in a shark attack late this afternoon,” she said.

“Deepest condolences to family & friends; this is devastating news. Solidarity with local emergency services in attendance.”

The Bay of Plenty beach has a history of shark sightings, particularly in recent weeks.

A video sent to 1 NEWS shows a great white shark cruising around Mercury Bay in the Coromandel, around 100km north of Waihī Beach, less than 24 hours before the attack.