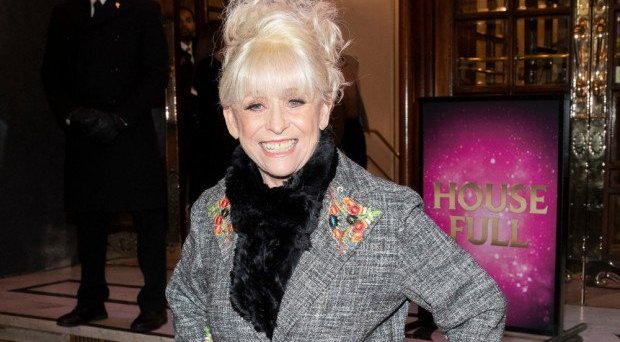 Dame Barbara Windsor’s funeral took place today, Friday, as her loved ones gathered to remember her life and legacy. Barbara’s husband Scott Mitchell was consoled outside the crematorium, as Ross Kemp, Matt Lucas and more showbiz starts made up the funeral procession.

Britains beloved actress died in December at the age of 83 following a lengthy battle with Alzheimer’s that left the nation heartbroken. She was cremated at a private ceremony at Golders Green Crematorium in London. Due to covid restrictions, only 30 guests were allowed to attend.

Her husband Scott Mitchell, whom she wed in 2000, was by her side right up to her death, he led the funeral procession. Scott arrived in the first funeral car, ahead of a car containing his mother Rita Mitchell, who introduced the couple.

Pantomime star Christopher Biggins was the first to arrive at the venue, wearing a long black coat and scarf, obscuring his face with a black mask. Comedians David Walliams and Matt Lucas, of Little Britain fame, were also sighted outside the redbrick building. The hearse arrived later, with a funeral procession moving behind the vehicle.

Flowers were arranged on top of the hearse, as the mourners quietly paid their respects to the star. Lined up next to the coffin, a flower arrangement spelled out the word “saucy” in a tribute to one of the actress’ most cherished roles.

Windsor played Saucy Nancy back in the early 1980s, starring in the original Worzel Gummidge. The word “Dame” could be read on the other side of the coffin, decoratively displayed in a flower feature. Outside the crematorium, actor Ross Kemp could be seen lining up with the mourners, wearing a dark suit and a face mask.

The vicar welcomed in Barbara’s husband, embracing him in comfort, mourners then silently scuffled in and took their seats, the door then closed for the private service to start.

Anthony Newley’s You Made Me Love You, marked the halfway point of the moving ceremony. Ross Kemp read the eulogy, stopping at times to fight back the tears. as he recalled the time he spent with the actress on East Enders and other special moments throughout their long time friendship. In the final moments of the ceremony, Babs’ own song, Sparrows Can’t Sing, echoed through the building.

After the 45-minute service, Husband Christopher said Dame Barbara would have loved being so greatly mourned and missed. He said: “Barbara would have been thrilled. I have never seen such an outcry of horror from everybody that she died.

“She was the most extraordinary woman and she was a friend of mine for 40 years and she was so special. We went on holiday together and we did shows around the country.

We’ve been everywhere. She was extraordinary.”

A JustGiving page set up as a tribute to Dame Barbara and in aid of Alzheimer’s Research UK has raised more than £145,000, reaching more than £150,000 with Gift Aid, and people have the option of donating in lieu of flowers.