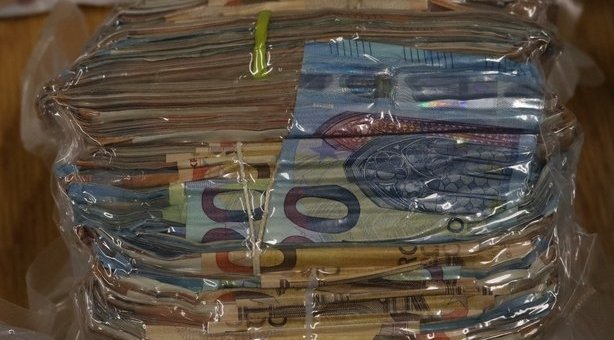 The massive haul of cash is suspected to belong to a Dublin crime family - Image Source: An Garda Siochana

AN GARDA SIOCHANA have seized €1 million in cash from a van in the Midlands of Ireland, suspected of belonging to a Dublin based drugs gang.

At 6:30 AM on Friday (January 8th), officers from the Gardai’s Drugs and Organised Crime bureau pulled over a van on the M7 motorway in County Kildare, west of Dublin.

Inside they discovered densely packed wads of cash amounting to around €1 million euro, which they suspect are the criminal assets of a crime family based in West Dublin.

The van’s 45-year old Lithuanian driver was arrested on suspicion of involvement in a criminal organisation and money laundering the proceeds of drug trafficking. He is being held at Portlaoise Garda Station, where anti-gang legislation means he can be detained for seven days.

Assistant Commissioner John O’Driscoll said the “significant” seizure is the result of an operation to target organised crime groups by locating and seizing their lucrative assets. The cash has been linked to a drug gang based in the Ballyfermot area of the Irish capital, who saw €4 million of their cash seized from an isolated property in county Kerry three months ago.

It is understood that crime groups based in the Dublin area stash their massive profits in rural Ireland to prevent seizures from police or theft from rival groups. Ireland’s powerful and sophisticated organised crime groups wield huge power across the island, as well as overseas in Britain, the Netherlands, Spain, and Australia.