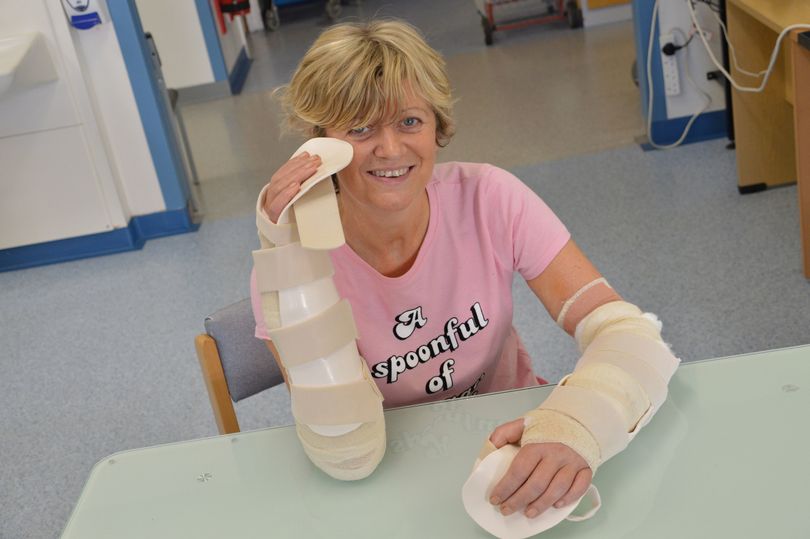 British Mum Who Had Double Hand Transplant Gains 90% Use of Her New Limbs. image: Instagram

A British Mum Who Had a Double Hand Transplant Has Gained 90% Use of Her New Limbs.

One of the first people in the UK to have a double hand transplant, a 50-year-old woman, from Lochwinnoch in Renfrewshire, has said her progress has been “phenomenal”, two years after the surgery. Cor Hutton was only the third person in the UK to successfully have the procedure, having had her hands and feet amputated in 2013 after suffering acute pneumonia and sepsis which nearly killed her.

Ms Hutton has paid tribute to the donor and the medical team on the second anniversary of coming round from the 12-hour operation on January 9, 2019. She said: “It’s flown in – I can’t believe how far I’ve come and yet how slow it’s been and how much is still changing every day.”

She was told two months ago she had regained 90% function in her hands, surpassing her surgical team’s goal to gain 75%. “For them to work better and better as time goes on is just phenomenal,” she said. As patients whose hands have been reattached can show improvement up to a decade later, she said she has “a lot of faith there’s more to come”.

The 50-year-old said touch and feel is the slowest to return due to the rate of nerve growth, but progress in the past year meant she was able to properly wrap presents at Christmas.

She said: “Christmas was big time for learning – using a Sellotape dispenser and using scissors – this year I was actually wrapping presents and tying bows rather than just putting them in bags with tissue paper.

“Last night I was trying to take my (prosthetic) legs off and trying to find the little button for that – I can’t normally see it but I can feel it but last night I felt it for the first time. It’s just the things that other people would take for granted. Little things like that, they just give me a wee thrill and that’s still happening quite a lot.” she said.

Despite being warned by her medical team of the time it would take to believe the new hands were hers, Ms Hutton said she had “instant acceptance” after the surgery, which triggered feelings of guilt about the donor and their family.

“I’ll always be aware of that – while I’m celebrating, someone else’s heart is breaking,” she said. It makes me think of how brave that family were to make the decision they made and give me the chance I got.”

She has been in touch with the donor’s family, who told her the hands now belong to her. She added: “I know they are mine but I will never take that for granted and I’ll never disrespect where they came from.”

Ms Hutton is on long-term immunosuppressant medication and as yet has not experienced any rejection of her new hands since the operation, until skin problems meant she spent Hogmanay in hospital.

“I noticed the donor skin had gone very red, speckled and raised,” she said. “It was a bit of a panic. It was solved with nothing more but heavy medication but it could have been so much worse. It was a wee bit of a scare but I’ve been really lucky for two years not to have anything.”

Ms Hutton has been shielding since the start of the pandemic and has had to transform the way her amputee support charity Finding Your Feet works, moving to phone and online help instead of in-person.

“We’re safe and working from home and I’m very, very aware of how lucky we are,” she said. There are a lot of people out there facing horrible things and I’m mindful of that. I’ve got so many things to be grateful for.”

Thank you for taking the time to read this news article “British Mum Who Had Double Hand Transplant Gains 90% Use of Her New Limbs”. For more UK daily news, Spanish daily news and Global news stories, visit the Euro Weekly News home page.