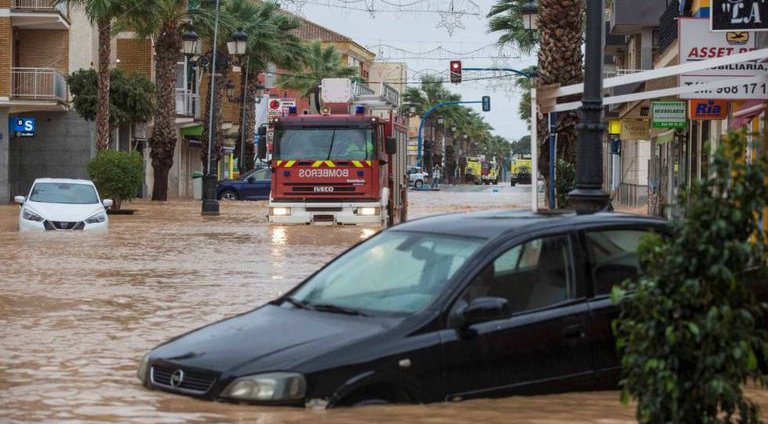 It never rains , it poars! The Costa del Sol had a fifith of its yearly rainfall in just one night. image: Twitter

Storm Filomena created havoc across Spain’s Costa del Sol last night when millions of litres of rainfall flooded city centres and cut off roads. Power cuts added to the misery as torrential rain drenched substations in metres of water, tripping the supply and thrusting thousands into darkness. All throughout the night, the electricity came on then went off, potentially damaging computers, internet routers and home equipment. Thousands of euros in claims are expected to be sent into electricity provider Endesa.
La Cala de Mijas witnessed some of the highest levels of rain; with many bars and restaurants reporting total flooding of their premises. Emergency crews were out in force but could not handle the number of requests, there was just too much flooding in the town. The video below gives you some idea of how relentless the torrential rain was.

“It just wouldn’t stop, it was frightening”, said local resident Janice Hodges, “I looked outside from the apartment balcony and could see the fire engines and people scurrying to try and get the water out of their bars. I felt so sorry for them, but we were helpless. Our car was drenched of course, we just managed to retrieve some items of clothing we left in the boot otherwise they would have been ruined. It was stuff we bought from the sales and forgot to take out. It’s all damp now, probably take days to dry out, not so great a bargain now is it…”
Mijas closed the entrance to the Fuengirola River and La Manzanilla as the floodwater rose to unprecedented levels making it far too dangerous to allow vehicles to cross. Traffic in the La Vega industrial estate on the Mijas golf road was limited to only very heavy goods vehicles with water flooding many businesses on the estate – a common yearly occurrence that was supposedly fixed last year by the town hall.
Mijas is still on orange alert for heavy rains, which can accumulate up to 80 litres per square metre in 12 hours. It is also on yellow alert for winds with gusts of 70 kilometres per hour.
It has also been recommended to “avoid unnecessary travel” and in the case of having to use a vehicle, “extreme caution” is advised. From the municipal government, emergency Firefighters, Local Police and Civil Protection have been mobilised. In the event of an emergency, the 112 Andalucia Emergency service is at your disposal, said the authorities.
Bar owners on Fuengirola port reported severe flooding once again as the pumps installed to avoid such occurrences were not switched on in time, many saying it’s the worst flooding they have seen in 10 years. Although a few had realised the severity of the storm, others have suffered losses of equipment and food stocks at a time when they can ill afford not to.
Similar stories are emerging from Alhaurin de la Torre, as cars and motorcycles were seen floating down the street in scenes reminiscent of last year’s storms. Estepona suffered badly too with residents too scared to even look outside the window as heavy winds pushed the rain sideways, one elderly lady was apparently heard screaming for help as the water came flooding into her second-floor apartment, due to her terrace door being not properly shut.
Neighbours rushed in and firmly closed the sliding door but already the front room was drenched in a foot of water. The lady’s daughter-in-law was eventually called and took her to her home.
Malaga was not spared either, fire and rescue crews were kept busy all night long and were still on the job this morning. The fire chief commended his staff but admitted they had been ‘totally overwhelmed’ by the storm. All over the region, residents are waking up to dark and damp Costa del Sol, there is more to come but hopefully not quite as severe as we have just experienced.
Emergency services across Andalucía will still be working through the weekend to clear up rubble from our roads and streets and should be applauded for their hard work and efforts in keeping us all safe. TW