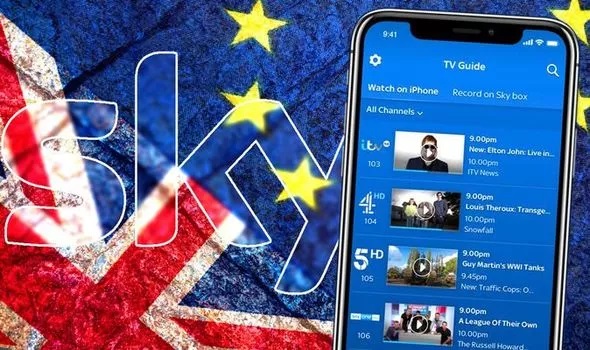 SKY has stripped all UK customers of their ability to stream or download shows from UK terrestrial channels or on-demand boxsets when abroad in the European Union in countries including Spain. The feature – a longtime staple of the hugely-popular Sky Go app – has gone due to the change in the relationship between the UK and the EU, following the implementation of the Brexit referendum on January 1, 2021.

In an updated FAQ page published by the satellite broadcaster, Sky warned all customers that from January 1, 2021, they will no longer be able to stream content from Sky outside of the UK using Sky Go, Sky Kids, Sky Sports, Sky Sports Mobile TV, or Sky Sports Box Office apps. That means those on holiday will no longer be able to catch-up on the latest episode of Love Island, stream a football fixture, or keep the kids entertained with a Paw Patrol boxset at the airport before the flight home.

Sky Go, which is designed to allow customers to tune-in to live channels included in their Sky TV package, download recordings from their Sky Q set-top box, and schedule recordings, is used by millions of people in the UK. The Android app alone has racked-up an impressive 5,000,000 downloads on the Google Play Store. Apple does not release the statistics for its App Store, but it’s safe to assume that it has as many downloads as the Android version.

New regulations that came into effect on January 1st that blocked UK residents’ access to Amazon Prime Video when travelling abroad.  Before the Brexit transition period, UK customers had been given full access to the Prime Video catalogue when travelling in EU countries including Ireland.

This included full live coverage of the Premier League, which will continue until at least the end of the 2021/22 season. A reduced catalogue will soon be available that will still include hit TV shows like The Boys, Utopia and Fleabag.

The full catalogue of content will be available upon return to the UK, but individuals who have relocated are recommended to change their home location in their Amazon Prime Video settings.  The same advice can also be given to Netflix subscribers as part of the cross-border portability regulation that will be revoked from this Friday, January 1 2021.

Expats wishing to use any of services are now advised by IPTV service providers to subscribe to a reliable VPN (Virtual Private Network). Although frowned upon by the Sky, Amazon and Netflix, and technically illegal when used in this way, a VPN basically fools the servers in the UK into thinking ‘you’ are located in England, thereby allowing to watch all UK TV. Expect to pay around €5.00 a month and always check for good reviews before entering into any yearly subscription. Many offer a free week’s trial or even a month which is a better option.