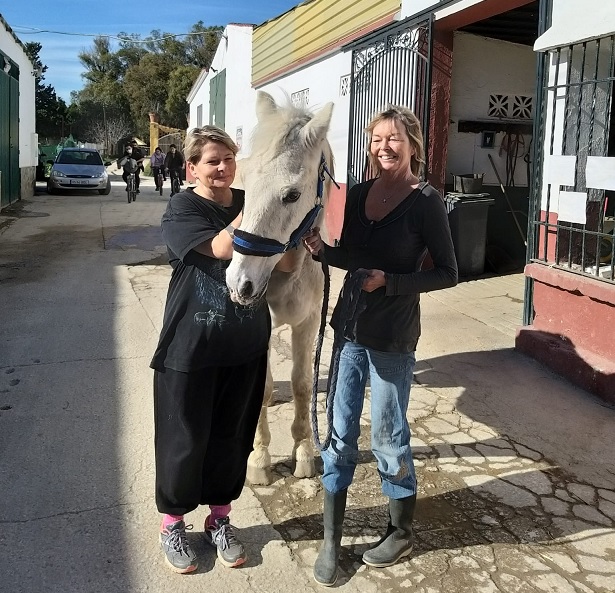 Tuija (L) Dandy the horse and Anna, all posing for the camera!

Fuengirola Horse Rescue Stables Receive a Special Guest.
This is the heartbreaking but uplifting story of a horse called Dandy, who, standing lonely and unattended in a field for the last three years stole the heart of Anna Idzerda, a professional estate agent, who spends all her spare time, and money, looking after abandoned or sick horses that have no hope of recovery or care.
In her rented stables, which are located on Calle Tramo de Union in Mijas Costa, Anna, and her very good friend Tuija, who also helps on a voluntary basis in the stables, had been quietly feeding Dandy raw carrots on a daily basis as she saw no evidence of any regular feedstuffs placed near him. To help support the stables, Tuija makes and donates for free a beautiful selection of artisan horseshoes which are proving popular among visitors to the rescue centre- if you ever drive past or visit the stables maybe you could purchase one- or even two! 100% of the money raised goes to the upkeep of the animals.


Head down and obviously in pain due to his swollen stomach, Dandy looked dejected, sad, and resigned to his fate- he would surely have died in that field without Anna’s intervention. Without thinking about whether she could actually afford it not, Anna talked to the owner and after bartering and taking into account they agreed on a price for the horse. Anna prefers not to reveal how much, but I can tell you, it was, i think, a substantial amount for a horse in that condition!
The day came when Anna and Tuija took possession of Dandy, who was at first a bit shy and nervous about leaving his ‘prison’ where he had stood for the last year- through an unbearably hot summer that led onto a freezing cold winter. The first thing they did was to give him a good washdown and show him his new home, his own space. Weeks later, and scared not to cause him any pain, some of the ‘war wounds’ of his past still have not healed properly.
However, Dandy is now a changed horse, after much love and attention and proper food and shelter, including regular walks, he flicks his tail up, shakes his head and has a glint in his eyes. He had a life at last and started to trust humans again.
Then came the day that Anna and Tula were dreading. A visit from the local vet revealed that the horse, who rose above all expectations, has terminal cancer. No actual time limit has been put on Dandys existence, but it is weeks rather than months.
The rescue centre does have other horses of course, but Dandy is a very special case, I’m sure you would agree. All our praise goes to Anna and Tuija for their outstanding voluntary work, it begs the question of what would happen to these animals without their help. If you would like to contact Anna, her number is 627 19 21 85. TW