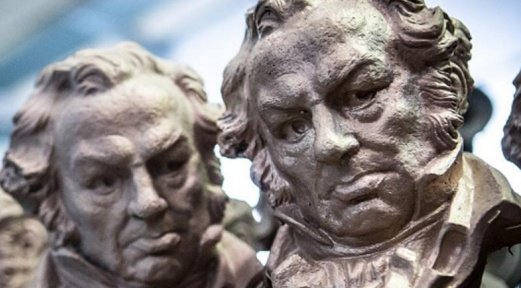 Spain’s 35th Goya Awards 2021 Nominations Announced.
The candidates for the 35th edition of the 2021 Goya Awards have been revealed. They have been presented to the academy from filmmakers who dared to make films even when there were no cinemas open. In this most difficult year for the cinema, 155 productions were presented to Goya 2021 for selection, among them, the nominees for best film were “Adú”, “Ane”, “Girls”, “Rosa’s wedding” and “Sentimental”.
Leading the list with an impressive fourteen nominations is “Adú”, by Salvador Calvo, followed by “Girls” and “Akelarre”, with nine nominations; eight for “Rosa’s Wedding” and six for “Black Beach.” Academics this time have opted for a commercial film, released when the pandemic was still a distant echo, as the most nominated. “Adú”, produced by Mediaset, has been the fifth most-watched film of the year with takings of more than six million euros at the box office.
The year, the 35th edition of the Goya Awards also has a new novelty, in that a film that has released directly on television could now compete. In the year of “streaming”, the Academy decided to update its rules and allow such a change. The five contenders for best picture were distributed through theatres with only “Europeans” (two nominations) being released first in peoples living rooms.
High up in the list contenders to the Goya 2021 awards is “The year of the discovery”  followed by “The girls”, by Pilar Palomero, and “Akelarre“, by Pablo Agüero. Isabel Coixet with “Nieva en Benidorm” has only two nominations, but already critics are saying it has the best direction- it also has an original script.
Juanma Bajo Ulloa, although forgotten in recent years, has made a strong comeback with “Baby”, which despite having had a testimonial passage through theatres, has been nominated for best direction and best original music.
In the category for the best filmmaker, there is Icíar Bollaín with “Rosa’s wedding” and Salvador Calvo with “Adú.” Even a regular at these awards, Fernando Trueba, with his Colombian film «The forgetfulness that we will be» sneaks into the Ibero-American film category.
On the list of best actors are Javier Cámara and Ernesto Alterio with “Sentimental”, David Verdaguer by “One of ours” and Mario Casas by “Thou shalt not kill.” There were more surprises among the actresses. Patricia López Arnaiz («Ane»), Amaia Aberasturi (“Akelarre”) and the veteran Kiti Mánver (“The inconvenience”, which already won the Goya in 1991 as best supporting actress for “Todo por la pasta”) will fight with Candela Peña (“Rosa’s wedding”)
Ana Belén and Dani Rovira revealed the finalists of the 2021 awards accompanied by the president of the Academy, Mariano Barroso, and the notary Federico Garayalde Niño. The winners of the Goya Awards 2021 will be present on March 6 at the Teatro del Soho CaixaBank in Malaga, at a gala Directed and presented by ‘Malaga’s son’, Antonio Banderas, alongside María Casado.
A total of 155 films released in Spain between January 1 and December 31, 2020, are eligible for the 35th edition of the Goya Awards. Of these 155 productions, 82 are fiction, 72 are documentaries and 1 is animation. Also participating this year are 56 European films, 16 Ibero-American films and 35 short films –15 fiction, 10 documentaries and 10 animations.
Of the 155 stories nominated for the 35th call for these awards, 57 are debut films. Regarding the scripts, 127 are original and 23 are adapted. For ex-pats that do not speak Spanish, it is well worth remembering that a high proportion of local cinemas who show the films will indicate in their listings if the film has English, French, German and more, subtitles. It goes without saying we will have to wait until all the cinemas are open again, which will hopefully be with a few months.