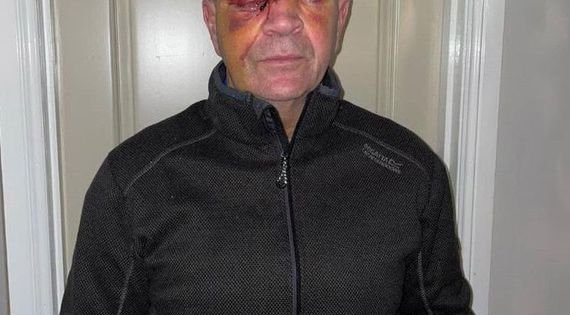 A driver has lost his livelihood and the sight in one eye after a wheelie bin of rocks were thrown from a bridge onto his lorry.

Fra McCaffery from Whiterock, West Belfast was seriously injured when the rocks were dumped on his vehicle as he drove under the Ballyboley overpass on the A8, at around 10.30pm on Friday, January 9.

His son Dan told BelfastLive that his father has been left traumatised by the ordeal, and due to his loss of vision has now lost his livelihood.

The family are now searching for answers as to why anybody would do something so “senseless”.

“We just want to find out why? Why would you do something like this? Did you think it was fun? Did you not realise the consequences of the actions themselves? Was it planned? It was a senseless attack,” said Dan, whose father has been a driver for more than 30 years.

“It makes me feel angry. Did they see my dad stumbling out of the truck, not being able to see, and he could have been hit by another car or lorry? Did they watch him, did they watch him fall or did they throw the bin and scurry off?”

Now Dan and the rest of Fra’s loved ones are concerned about the after-effects of trauma.

“For someone who drove all his life, drove taxis and took people on tours around Ireland, these are things that he won’t be able to do anymore – this is his livelihood.”

Anyone with information or dashcam footage which could help police with their enquiries is asked to call 101 quoting reference number 1944 08/01/21.

Thank you for taking the time to read this news article “Driver loses livelihood and sight in one eye after rocks thrown from a bridge onto his lorry”. For more UK daily news, Spanish daily news and Global news stories, visit the Euro Weekly News home page.