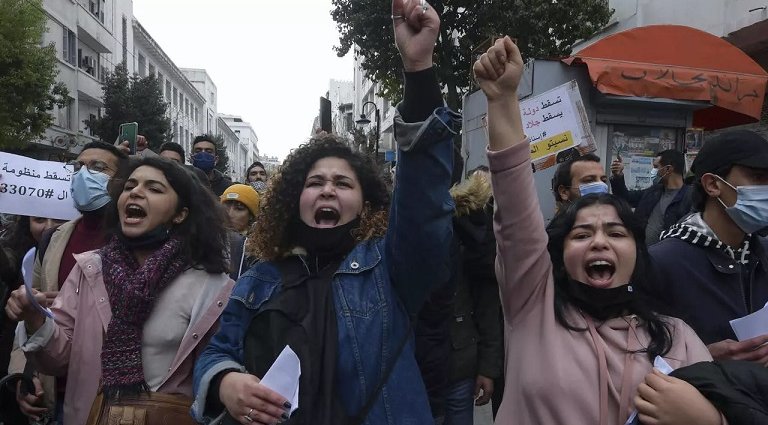 Protesters marched in the capital Tunis today, Saturday, over the lack of jobs and police response to ongoing demonstrations, in defiance of the government ban on crowds amid coronavirus. Security forces were present in large numbers and tried in vain to block off the Tunisian city’s main central avenue.

Protesters chanted “the people want the fall of the regime” – a chant popularised during the so-call Arab Spring a decade ago and held up banners and slogans decrying the security response to more than a week of demonstrations and nightly clashes between youths and police in cities across Tunisia.

“We can’t accept a police state in Tunisia 10 years after the revolution… it is shameful,” said Mahmoud, a young cafe worker who did not give his family name. The protests, 10 years after a popular revolt against autocratic rule introduced democracy in Tunisia, represent the biggest bout of political unrest in several years, with police detaining hundreds of people.

Economic misery exacerbated by novel coronavirus restrictions in the tourism-reliant nation have pushed growing numbers of Tunisians to try to leave the country.

“The situation is catastrophic,” said Omar Jawadi, 33, a hotel sales manager, who has been paid only half his salary for months. The politicians are corrupt, we want to change the government and the system.”

The police have said more than 700 people were arrested over several nights of unrest earlier this week that saw young people hurl rocks and petrol bombs at security forces, who responded with tear gas and water cannon.

Human rights groups on Thursday said at least 1,000 people had been detained.

“Youth live from day to day, we no longer have hope, neither to work nor to study — and they call us troublemakers!” said call centre worker Amine, who has a degree in aerospace engineering. We must listen to young people, not send police in by the thousands. The whole system is corrupt, a few families and their supporters control Tunisia’s wealth.”