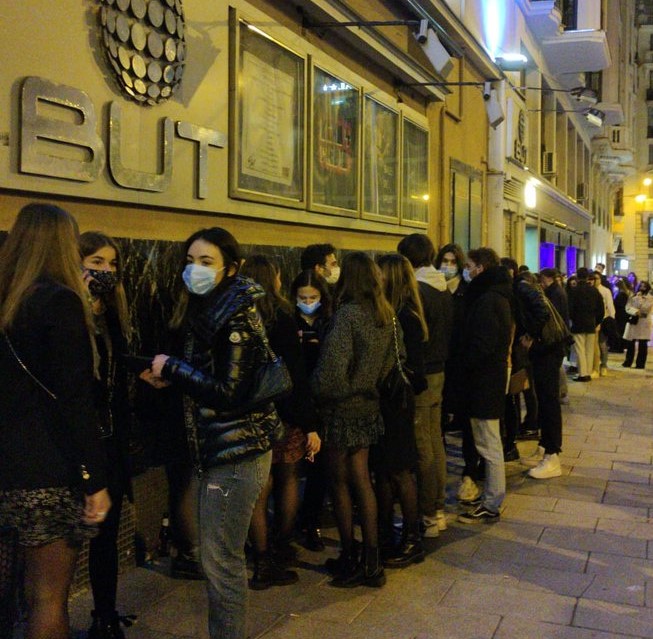 Outrage as dozens queue outside a Madrid nightclub hours after an illegal party was shut down.

THE Municipal Police is still investigating a party at Barcelo Theater on Thursday, January 21, in which dozens of people gathered ‘dancing, jumping and singing’ without a mask or social distancing.

But just 24 hours after the party was shut down, photographs have appeared on social media of long queues of people waiting to get into the nightclub despite a continued upward curve in infections and a curfew.

Just after 7pm on Friday night, January 22, several dozen people queued outside the well-known disco, and the images were shared through social networks, sparking outrage.

“After the scandal over the images of the covid party at the Barceló Theater, 24 hours later they are about to start a new party. Brainless people who only look at their navel and authorities who look the other way,” wrote one furious tweeter.

In a statement on Friday, the Barceló Theater said it regretted the content of the images and explained that “immediately after” the images were shown, staff “expelled” the group of people from the premises “as quickly as possible….for breach of health regulations”.

The club said the gathering was a “spontaneous reaction from the public” and took place in a “very specific area” while adding that it will “reinforce the necessary internal measures” to ensure it doesn’t happen again.

He recommended they walk through the hospitals and funeral homes in the region to appreciate the drama and pain “that the pandemic is causing.