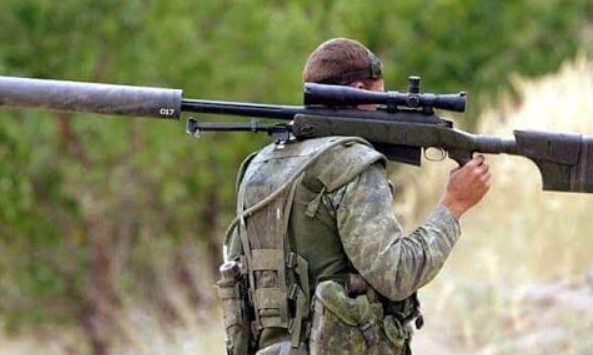 A veteran British SAS sniper has killed five ISIS terrorists, including a top commander, with one single shot, from a distance of over a half a mile away, reports The Daily Star.

The unidentified SAS sergeant, during a kill or capture mission against Islamic State in November, was using a Barrett .50 calibre rifle, the most powerful gun in their armoury, a weapon used mainly to hit larger targets like aircraft, cars, truck and lightly armoured tanks, and its impact on humans is devastating and a single round can take off a limb.

An SAS team had been working with Kurdish fighters to find an ISIS unit responsible for attacks on villages and had been watching a suspected ISIS bomb factory for several days when five men left the building, with one of them spotted filming a fully armed suicide bomber, smiling for the camera.

A source said, “The plan at that stage was to drop the suicide bomber with the first shot and then the leader if they felt they could identify him. But we got lucky. The target was at the maximum range. The sniper adjusted for the wind aimed and gently squeezed the trigger. He waited for the target to drop but instead, the guy exploded”.

He continued, “When the dust settled there were four bodies lying around with various bits missing. It then occurred to the sniper that the vest had detonated. When you take out a suicide bomber you normally aim for the head. But this guy was at the extreme limit of the sniper’s shooting ability so he went for the centre of his mass – the chest”.

The source said that when the SAS team returned to their camp the sniper was presented with a baseball cap with the words ‘Long Range Death’ on it.

Thank you for taking the time to read this news article “British SAS Sniper Kills Five ISIS Terrorists With A Single Shot ”.