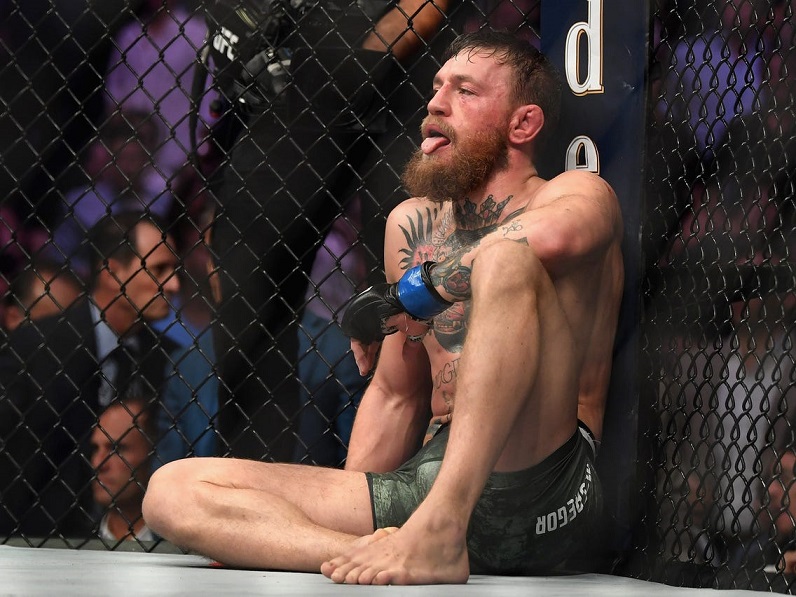 Conor McGregor has been medically suspended for up to SIX MONTHS after the brutal UFC 257 KO defeat he received from Dustin Poirier.

THE medical suspension comes after the former two-division champion, 32, suffered a devastating second-round KO loss to Diamond on Saturday in Abu Dhabi. McGregor was apparently seen on crutches the next day after he was caught by a series of devastating kicks from the American, who he now wants to meet in a trilogy showdown.

That was McGregor’s third setback in his last six octagon outings and has shattered his hopes of landing a money-spinning rematch with rival Khabib Nurmagomedov. The suspension also delayed his quest to reclaim the lightweight title – although he has vowed to bounce back and fight again as quickly as possible.

However, the Irishman will now have to wait a little longer than he hoped for to get back down to business and doing what he does best. MMA.tv, who are the official record keepers for the Association of Boxing Commissions, have confirmed to MixedMartialArts the superstar has been medically suspended for six months.

That means, unless he gets cleared by a doctor, he will be unable to fight again until July. McGregor can return after 45 days if he receives a negative X-ray on his right tibia/fibula, he is also banned from contact for 30 days following the TKO.

Meanwhile, Poirier has received the standard seven days mandatory rest. Despite his recent setbacks and his huge bank balance, McGregor is adamant he has no intention of calling it a day.

McGregor was also suspended for a month on medical grounds in October 2018, after his UFC 229 defeat by Khabib Nurmagomedov. The Irish man was beaten in Las Vegas when he tapped out in the fourth round following Nurmagomedov administering a rear-naked choke.

Nevada State Athletic Commission (NSAC) sanctioned the bout and confirmed McGregor was suspended from fighting until November 6, with no contact until October 28 – medical suspensions are routine in UFC.