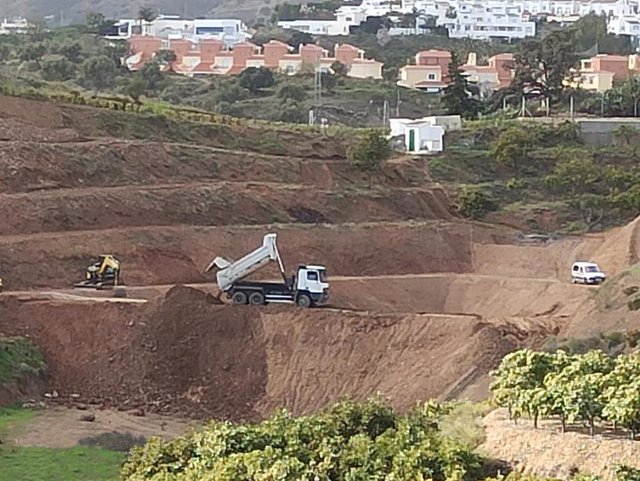 Ecologists denounce the construction of a new reservoir over ‘illegalities’ and ‘potential risks’.
The Axarquía Nature Studies Cabinet, GENA-Ecologistas en Acción, has filed a complaint with the Junta de Andalucia over the building of the basin in Velez-Malaga municipality.
They have raised concerns over “the illegality and potential risks of a reservoir for agricultural irrigation” that is being built on a farm in the centre of Chilches.
President of GENA, Rafael Yus, said in a statement that a series of earthworks with heavy machinery have been taking place since last December on said farm, “supposedly destined for the cultivation of mangoes.”
Yus explained that the project involves the construction of a basin to hold around 2.5 million litres of water.
“It’s located right at the confluence of two pluvial springs that, under normal conditions, form a tributary stream of the Santillán and has a wall of land in front, as a dam,” he said.
Ecologists denounce the construction of an irrigation pond in Vélez “for its illegality and potential risks”
According to the group, the work represents “a certain danger for the downstream inhabitants because it is carried out using only loose earth as a containment dam”.
GENA has stressed that this is “a method that makes these dams unstable, they do not withstand the pressure of the dammed water and, therefore, end up crumbling, pouring out all its content, with dire consequences for the affected residents, as has been demonstrated in several cases in Axarquía.”
It also argues that the works were reported to the Local Police of Velez-Malaga, “which verified that they only had a minor work license”, in addition to the fact that “it is known that the farm has a well built illegally, without authorisation from the Andalusian Mediterranean Basin”.