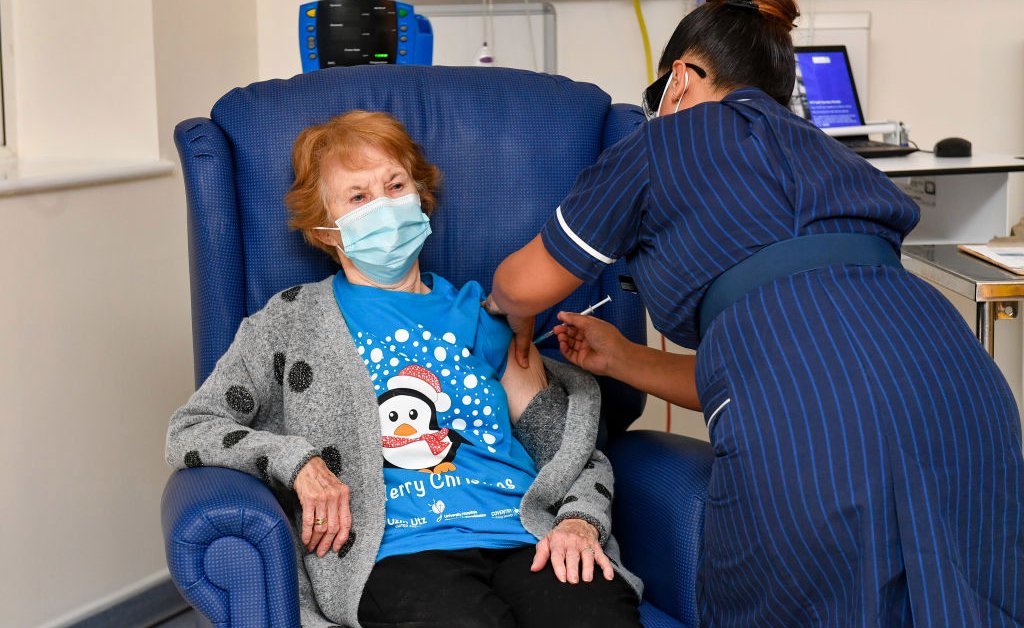 THE VACCINATION DRIVE is starting to ease the UK’s Covid pandemic and is reducing cases as well as protecting recipients from symptoms, early data shows.

Deputy chairman of the Joint Committee on Vaccination and Immunisation (JCVI), Professor Anthony Harnden, said preliminary research suggested the first dose of the vaccine is helping to protect young adults and over-80s.

The Professor added that the data, which is set to be published in the next few days, also indicates Britons may benefit in the long-term from a delayed second dose, some scientific bodies had earlier expressed doubts over the delay.

Public Health England (PHE) vaccination records show that the data is mostly based on the Pfizer/BioNTech jab and represents around three to four weeks of the programme.

A total of 445,941 Covid vaccines were administered on Thursday, Jan. 28, official figures show, of which 443,985 were given to people receiving their first dose.

NHS data shows that 344,464 vaccinations were administered across England on January 28. The total number of people vaccinated in the UK then rose to 7,891,184, a figure the government has every right to be proud of. Britain’s pace of vaccination is the fastest of any large nation in the world. Only Israel and the United Arab Emirates are moving faster.

The rapid rollout is a rare success for a country whose response to the coronavirus has otherwise been bungled — plagued by delays, reversals and mixed messages. All of which have contributed to a death toll that recently surged past 100,000 and cemented Britain’s status as the worst-hit country in Europe.

The UK’s vaccines taskforce has pre-ordered 30m doses of the Janssen vaccine, produced by Johnson and Johnson via its Belgian subsidiary, and 60m Novavax doses, which will be administered as two doses per person if it gets regulatory approval. Both can be stored at fridge temperatures.

In total, the UK has procured 247m vaccine doses from companies with positive phase 3 results: roughly 3.7 jabs per person. Canada, Chile, Australia and New Zealand are the only countries with a higher rate per head, according to data from Duke Global Health Innovation Center including contracts signed up to 25 January.

The European Union has abruptly reversed a plan to use emergency Brexit measures to restrict exports of Covid-19 vaccines from crossing the Irish border into the United Kingdom after it sent shockwaves through Northern Ireland, London and Dublin.