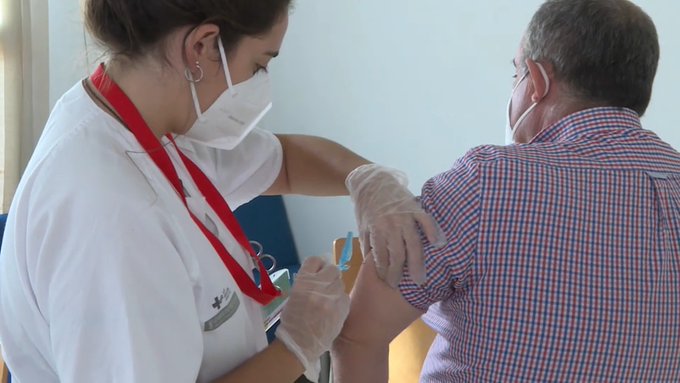 SPAIN to receive 6.7million Covid-19 vaccines by March but reserves judgement on using the AstraZeneca jab of the elderly

The Minister of Health, Carolina Darias, has informed councillors during the Interterritorial Council meeting on Wednesday, February 3, that a total of 6.7million Pfizer, Moderna and AstraZeneca jabs are expected to arrive in Spain in the next two months, giving hope that the so-far underwhelming vaccination rollout might pick up some speed. According to the minister, four million doses will be delivered in February and a further 2.7million will arrive in March, meaning that some 3.3million people, or 7 per cent of the population, could be vaccinated against Covid in the coming weeks.

It is most welcome news, but these ambitious figures still only bring Spain to one-tenth of the target – President of the Government, Pedro Sanchez, has previously claimed that 70 per cent of the entire population will be immunised by the summer despite the “difficulties in the arrival of doses.”

Mr Sanchez has been much criticised for his ambitious projection. Hollywood heartthrob and Malaga native Antonio Banderas openly scoffed at the idea that the vaccination plan was on track when he was interviewed by ABS News.

“I do not believe that we will reach the summer with 70 per cent of the population vaccinated,” the Hollywood heartthrob said. “Nobody believes it. Not even the person who said it believes it, why are we going to fool ourselves,” the actor said.

Meanwhile, speculation over the efficacy of the Oxford-AstraZeneca jab abounds, with Ms Darias claiming that for now, this vaccine will not be administered to over 80s. When health experts meet at the Vaccine Conference on Thursday, February 4, they will make a decision about whether or not to veto the Oxford jab for a wider age group. Several other countries, such as France and Sweden, have already decided not to use the vaccine on people over 65 years as they claim that enough data isn’t available to prove that it is effective.