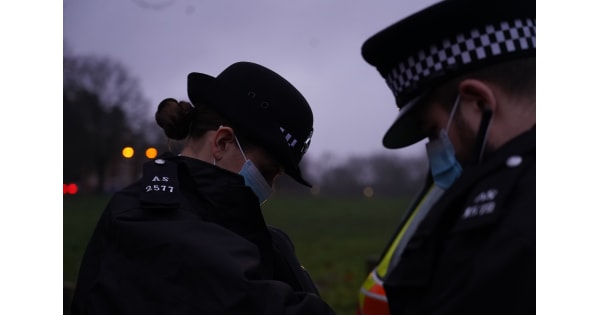 POLICE are warning the public to be extra vigilant against Covid-related fraud after two elderly women were almost scammed out of £500 by a man in London posing as an officer claiming they had to pay a fine for breaching restrictions.

The suspect has been arrested and charged for a Covid-related fraud, prompting Met Police to urge the public to be extra vigilant against such frauds and report suspicious behaviour.

The incident occurred on Friday, January 29, when two elderly woman were approached in the street near Stratford Centre, by a man who claimed to be a police officer.

He told them they had breached Covid regulations and forced them to go to a cash point, where he demanded £500 as a fine for flouting restrictions.

Thankfully the incident was observed by nearby officers who arrested the man.

He was subsequently charged with blackmail and impersonating a police officer.

“However the public needs to be aware that some people may well see the current emergency as an opportunity to exploit others.

“I appreciate that these are frightening and lonely times for many people and we want to be careful not to cause further distress or worry.

“However, a general conversation on how to spot a bogus officer may stop someone falling victim to these scams. If you think that you, or anyone you know, has been the victim of such a fraud, then please contact police on 101.”

The Met Police offered advice on how to verify a police officer.

*In the event a police officer needs to speak with you, if they are not in uniform they will identify themselves clearly by showing you their warrant card, which can be verified by calling 101.

*A police officer will never ask you for remote access to your computer, or ask you to click on a hyperlink in order to participate in an investigation.