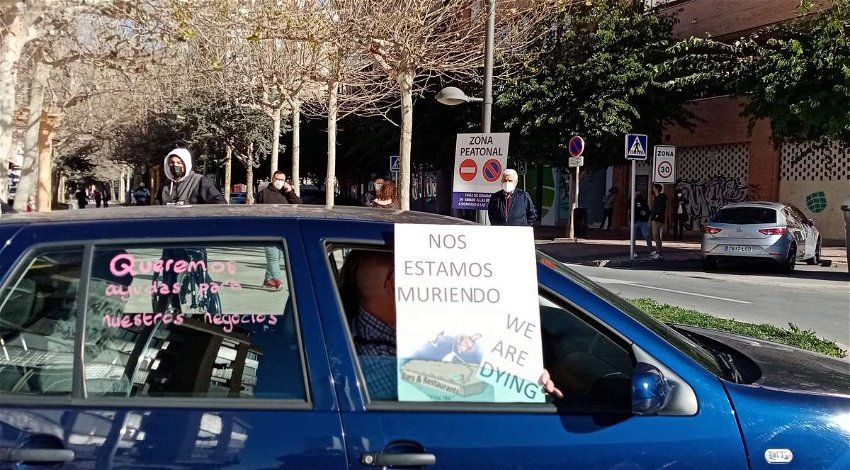 BENIDORM hospitality workers form a caravan and ‘march’ on the Valencian capital
Hospitality workers throughout the Costa Blanca have been launching peaceful protests in recent days to show the government they are prepared to stand up and fight against crippling lockdown regulations and the aid package that for many business owners have proved to be far too little, far too late. On Thursday morning, February 4, a caravan of cars belonging to members of Benidorm’s hospitality and retail sectors departed for Valencia under the slogan ‘Impossible to Resist’ – an intentional pun on Ximo Puig’s relief package, Plan Resiste, perhaps?
The protest was organised by the business associations of Abreca-Cobreca, Avibe, Ociobal, Aptur, the Benidorm Camping Association, Young Entrepreneurs of the Marina Baixa, the Association of Beverage Distributors and Aico. Once the caravan arrived at the Oceanico in Valencia, the group met up with other protestors, and the group travelled on foot, while observing Covid-19 regulations, through the city and on to the Palau de la Generalitat.
There, the representatives of the hardest-hit industries read a manifesto, claiming that the solution is not “the ridiculous aid packages that are invented to cover our mouths and say that they are helping us.
“The solution is to support firmly, and without complexes, the self-employed and companies that create employment, generate wealth and generate social welfare in our towns and cities, as is being applied in most European countries.”
Businesses in Benidorm have been dealt blow after blow, with a recently amended decree by the regional government extending the current restrictions until February 15. This means that the Benidorm borders are closed from 3pm on Fridays until 6am on Mondays. In addition, all bars, restaurants and cafes have been forced to shut their doors, and non-essential retail must close at 6pm.
“Benidorm is always loyal to the decisions taken by higher administrations, aware that these are based on the necessary information and the agreement of the health authorities and experts,” said local mayor Toni Perez.
________________________________________________________________________
Thank you for taking the time to read this news article “Benidorm Hospitality Workers ‘March’ On The Capital”. For more UK daily news, Spanish daily news and Global news stories, visit the Euro Weekly News home page.