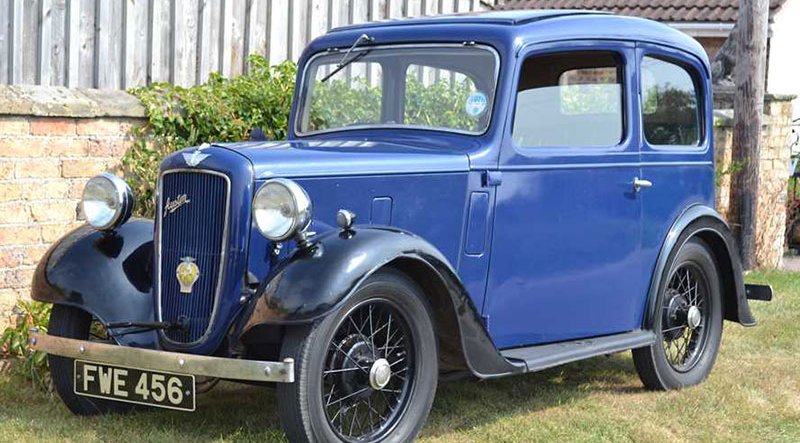 I was proud of my very first car, although it did have a few shortcomings. The main one was that I never knew whether it would start in the morning. Not being technically minded I assumed this was affected either by the weather or by the mood of the little car.

I would turn the cranking handle, often in the rain, while the lace curtains in our street twitched and fluttered in amusement.

When I purchased it in the mid fifties it was eighteen years old – a product of the pre-war years that preceded the revolutionary “new look” unveiled in 1949. Its headlamps were independently mounted on the wings and it had a running board along each side.

The car had no heater, no radio, no electric windows and no direction winkers. But it had a boot which could comfortably accommodate four packets of Shredded Wheat, a blanket and a spare wheel.

The really unusual feature of this vehicle was its lack of power. In and around High Wycombe there are some very steep hills and one or two of them were beyond the capabilities of the aging 850cc engine in first gear.

This meant that, every time we wheezed to a crawl on a sharp gradient, I had to do a five-point-turn and clank into reverse to the reach the top of the hill. This was not only highly embarrassing but, especially in the rush hour, quite dangerous.

Through my cracked windscreen I would be confronted with the glaring face of the first in a line of drivers, hooting his horn with rage, accompanied by a symphony of angry hooters behind him.  As I slowly edged backwards up the hill, several impatient drivers would overtake me, taking severe risks on the bends.

The windscreen wipers were not exactly synchronised but they did work. The direction indicator to the right responded to my instructions but the left one was more moody and less reliable. If it failed, to flick out I had to stick my arm out of the window and somehow indicate that I intended to turn left.

As the fuel gauge was not accurate, I had to stop for petrol every time the needle went down to half-full, at which stage it was likely to descend very rapidly to show empty. Likewise, I had to make allowances for the speedometer, which I had no reason to trust.

Not that this car was likely to manage any speed in excess of the limits. The odometer was fine, and I could tell how far I had driven on a trip or in a given period.

Unfortunately I have no photos, but a pristine example of my first car appears above. No built-in headlamps, integrated wings.  No heated seats or air-conditioning, hi-fi speakers, satellite navigation, electric sunroof or remote control keys. My car just had character and a big heart.