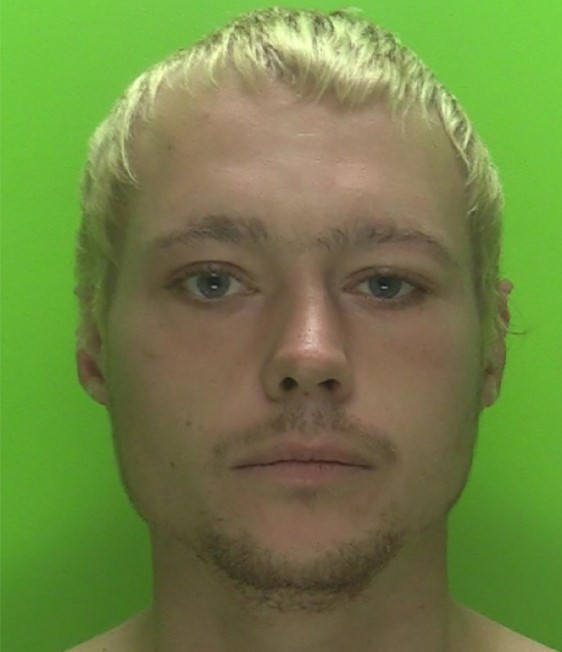 Thug who dropped bowling ball over 14ft on a council worker’s head causing severe brain injuries has been locked up for 16 years.

Damien Hammond, 31, started shouting at council workmen about a television they were clearing from the pavement outside his flat in Nottingham.

Hammond shouted from his upper window, claiming the TV was his and that he would come down, before throwing the bowling ball, which was wrapped in jeans, out of the window.

It struck the victim on the head, causing him to fall to the floor with a large gash wound and blood streaming down his face.

The council worker was taken to hospital and suffered serious injuries including a fractured skull and brain trauma.

The victim’s life has been affected in many ways – including requiring long term support from brain injury specialists and time off work and driving.

The horrific incident occurred on December 30, 2019, when two Nottingham City Council workers were performing work duties outside the flat.

Emergency services were called to the scene and police swiftly arrived, containing the area, and tried to engage and negotiate with Hammond.

A stand-off ensued, lasting several hours, as specially-trained officers continued to try and negotiate with Hammond.

He refused to come out of his flat and threw items out of his window.

Towards the end of the incident, he climbed out onto the window ledge, armed with a hammer, and threatened officers with it.

Hours later Hammond dropped down from the window ledge and was arrested.

Following a jury trial in December, Hammond was found guilty of grievous bodily harm with intent and affray. He was sentenced to 16 years in prison and will serve a minimum of 12 years.

Nottinghamshire Police Detective Constable Sarah Gregg, the officer in the case, said: “I was faced with piecing the evidence together in order to prove that Damien Hammond intended to cause really serious harm to the victim, something that was never in doubt in my mind after I initially attended the scene whilst other officers were working hard to bring the stand-off to a safe conclusion.

“As the Prosecuting Barrister, Mr Watson, said during the trial, to drop a bowling ball from a height over 14 feet onto someone below has no other consequence than really serious injury, which in this case amounted to brain trauma for an innocent council worker.

“I would like to pay special thanks to the victim and his very supportive family, who have had their lives changed by the incident, and have been living with the consequences of a terrible act for over a year.

“It sends out a strong message that both the council and police will vigorously pursue through the courts anyone who attacks one of our workers.

“We remain shocked and saddened by this terrible incident last year and have been supporting our staff member during his recovery.

“To be assaulted in this way while simply doing his job is totally unacceptable. We will not tolerate violence towards our staff, and I would like to thank the police for their work on the investigation.”