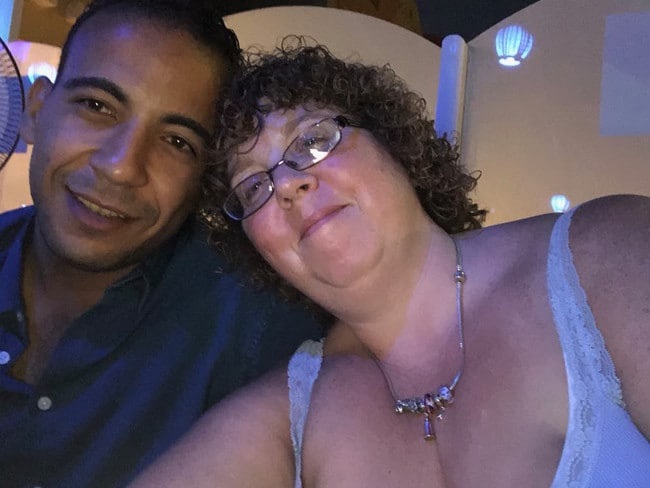 A woman who left her husband for an Egyptian toyboy almost half her age has been left heartbroken after he dumped her and took £1,500 – then branded her “old” and fat!

Joanna Girling, 45, fell for Hassan Kahlied, 24, while on holiday in Sharm El-Sheik in June 2018. She had travelled to the resort with her husband John but quickly fell for the younger man’s charm. Joanna even cheekily managed to sneak away to get a fake certificate so she and Hassan could beat strict marriage laws and have sex as the whirlwind romance took off.

But the former Tesco worker was left devastated when her lover later called off their relationship after she had just wired £400 for food and bills – revealing he was to marry an Egyptian woman.

The holiday heartbreak hasn’t put Joanna off younger men, however, as she has now found love with Hysm Feygo, another Egyptian – and they are already planning to have a child. But it’s caused a rift in her family, she says, with relatives describing her as “foolish”.

Joanna, from Norfolk, said: “I thought Hassan loved me, he’d told me he wanted to marry me but it turned out to be a lie. He just used me for my money, I felt like an idiot. I gave up my marriage for him. I didn’t know if I could trust someone else again but Hysm is the love of my life. I know his feelings for me are real, he’s never asked for a penny.”

A lack of action in the bedroom back home meant her head got turned and left her “flattered”, she said. Joanna said: “I was happy in my marriage at first but as time went on we grew apart and I lost interest in having sex with him. Like a lot of married couples we became less and less attracted to each other but we stayed together for convenience. We didn’t sleep together for nearly 10 years. We didn’t have kids but we had a house and dogs together.”

She added: “By 2018 he wasn’t affectionate at all which made me feel unwanted and unattractive so when local men would compliment me in the shops and call me beautiful, I was flattered.”