Witness One: What Links a Recent Murder and a 1990s Seville Sex Scandal? 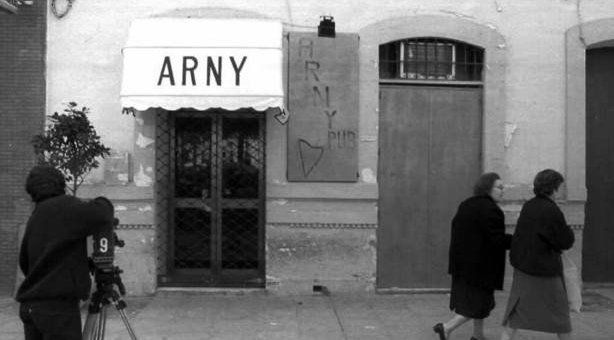 On Friday, the fifth of February, the sleepy Andalucian town of Bremes was the scene of a grisly murder. Guardia Civil officers rushed to reports of a fight in the old centre to find the body of a man who had stabbed in the head with a machete sword.

A swift local manhunt ended with the arrest of Jose Antonio Sanchez Barriga – a 43-year-old Sevillian who has since confessed to the murder. Despite the horrific violence of this recent killing, it is neither the first nor the most notorious time Barriga has been in the media spotlight. In the 1990s he was better known as “Witness One” in the “Arny Case” – a sex scandal that sent shockwaves through Seville and is still the subject of controversy.

In 1995, teenage Barriga told made a statement to police that a widescale underage male prostitution ring was operating from Bar Arny – a popular establishment located on Seville’s Plaza de Armas, along the river in the heart of the old city. A nine-month police probe into the bar was inconclusive, but the testimonies of multiple teenage boys that they had been exploited as sex workers for some of Seville’s best-known celebrities caused the case to go to trial.

The court case lasted over a year and drew huge national media attention. Among the 49 men charged in the sex scandal was TV presenter Jesus Vazquez, actor Javier Garruchuga, and comedian Jorge Cadaval – as well as a local Judge and a Marquis. Barriga was known in the media as “Witness One”, whose testimony served as the centre of the case but was later dismissed by the court for its numerous contradictions and inconsistencies.

By the end of the trial, only 16 of the accused were convicted of the underage prostitution charges – including the owner of Arny who was given a 33-year sentence yet released after eight. Many of the witnesses retracted their testimonies, claiming they had been forced to make false statements by police.

After the scandal drew to a close, many accused authorities of staging the media spectacle to distract from other controversies unfolding at the time. The PSOE party was embroiled in the Filesa Case, regarding illegal fundraising in the 1989 general election. Meanwhile, the government was under fire for allegedly supporting GAL, a violent vigilante group established to fight domestic terrorists in the Basque Country.

Others said the case was based on homophobia, with the list of defendants largely comprised of gay men who had never had sexual relations with minors – nor even entered the Bar Arny in many cases. Whatever the motive or reason of Barriga’s sensational testimony, the youth was jailed shortly after the case for robbing tourists at knifepoint in Seville’s Prado de San Sebastian.

Just months after his release from prison in 2003, he was jailed again for murdering a 72-year old man who had solicited him for sex outside the Santa Justa train station. The victim’s body was found in his car just outside the city, his possessions stolen and his head crushed by a concrete block.

Now, once again, Barigga finds himself answering police questions following the recent Bremes murder. The man who was once the teenager known to Spain as “Witness One” has lived a life embroiled in crime, controversy, drugs, and scandal. Although his confession has brought the machete murder to a quick and simple resolve, it is unlikely that the truth of the Arny Scandal will ever fully come to light.

Thank you for taking the time to read this news article “Witness One: What Links A Recent Murder and a 1990s Seville Sex Scandal?”. For more UK daily news, Spanish daily news, and Global news stories, visit the Euro Weekly News home page.