A milestone for Estepona as new hospital officially inaugurated 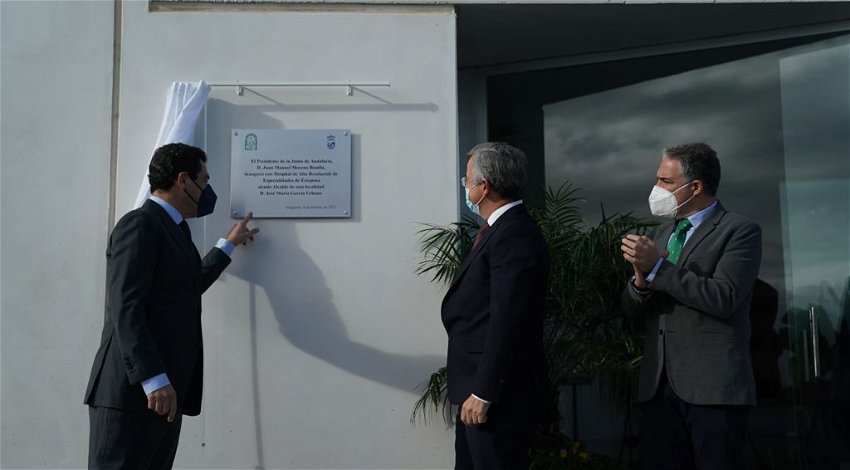 THE mayor of Estepona, José María García Urbano and the president of the Junta de Andalucía, Juan Manuel Moreno formally inaugurated the Estepona Hospital on Monday February 8.
Costing Estepona Council more than €16 million to build, the mayor said that it is a “milestone for the municipality due to its great relevance and significance.”
He thanked the Junta de Andalucia and its president for equipping and staffing the hospital which is “a guarantee of quality of life and well-being” which complements the process of modernisation and improvement of services that Estepona has witnessed in the last decade
Looking back, the mayor explained that the concept of the new hospital was first agreed in 2007 with the expectation of it being open by 2009 but in 2011, not only had work not commenced but within two days of José Urbano becoming mayor, the Junta cancelled the project.
As he was determined that residents in Estepona deserved a local hospital, he campaigned to raise funds in order for the Council to pay for the construction and it took until 2016, before the Junta agreed for the project to proceed.
Now, the Estepona Hospital will be a pioneer in the western region of the province of Malaga and a model of specialised and close care, reducing waiting times for tests and consultations and promoting urgent health care.


The Junta has already allocated an additional €2 million to allow for the hospital to be equipped to accept Covid-19 cases and will open other departments as time and the pandemic allow.
In his speech, President Moreno confirmed that approval has been given for the investment of €75 million to upgrade and extend the Costa del Sol Hospital in Marbella as there is a great need for better and more modern health services along the coast.
Thank you for taking the time to read this news article “A milestone for Estepona as new hospital officially inaugurated”.