Another demonstration in Palma against the Government due this Saturday 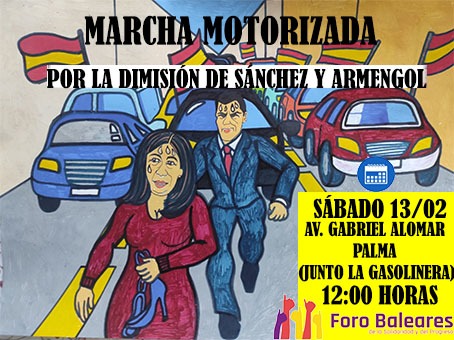 THERE are plans for a motorised demonstration in Palma on Saturday February 13 at ‘high noon’ to call for the resignation of both the Spanish and Balearic Governments.
Organised by the Foro Baleares de la Solidaridad y del Progreso (Balearic Forum for Solidarity and Progress) which is in favour of the unity of Spain and was formed in 2017 following its success with the demonstrations that took place in Palma to support Spanish unity and the security forces that, at that time, were deployed in Catalonia to defend the constitutional order.
Unlike previous demonstrations run by the Balearic Resistance, this call is for a purely motorised demonstration which appears to be within the law and will start at Gabriel Alomar Avenue in Palma and follow a pre-planned route.
The Forum says that it “believes believe that both Sánchez and Armengol have hit rock bottom in the nefarious management of the coronavirus pandemic.
“There are thousands of families who have been left in the most absolute ruin and misery because of the inaction and negligent management of our rulers.
“We call for the immediate calling of general and regional elections in the face of the danger that the citizens of the Balearic Islands and Spain face as our rulers are still in charge of the reins and the future of our country and our Autonomous Community.
“We appeal to all civil associations, affected by the totalitarian restrictions of Armengol, to all those who are affected by the Armengol’s totalitarian restrictions, to all the constitutionalist political parties, in general, to all those who disagree with the management of the pandemic by our rulers, to support this call.”
The Forum has indicated that similar demonstrations will be held in other major Spanish cities at the same time.
Thank you for taking the time to read this news article “Another demonstration in Palma against the Government due this Saturday”.