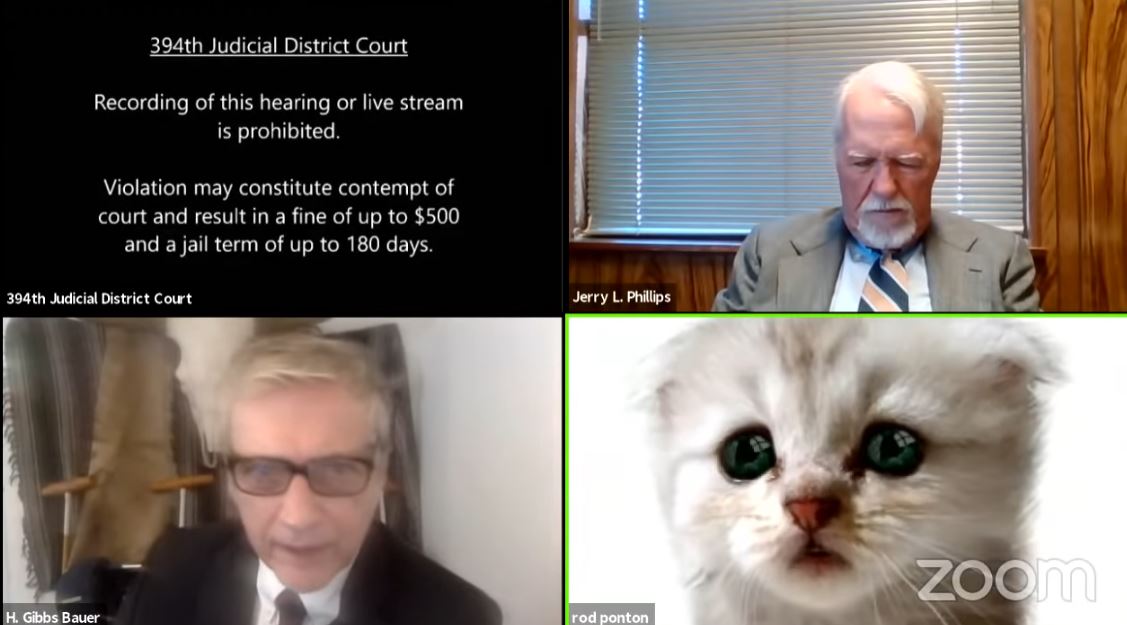 KITTEN Zoom filter mishap during virtual court case as lawyer tells judge he is not a cat.

In probably one of the most bizarre things that has ever been seen in a virtual court room, a lawyer managed to appear on screen as a cat after he did not realise that the Zoom filter was still on.

The COVID-19 pandemic means that most people have now undertaken at least one Zoom call, and for others it has become a daily way of life. Many will know the nightmare worries that you can face over what could go wrong, but one Texas lawman has gone viral with his mistake.

It is thought that the lawyer’s child had been using the computer and Zoom before the virtual court case and had left the cat filter on.

Lawyer Rod Ponton attended the virtual hearing and had no idea that as he appeared before Judge Roy Ferguson, he looked like a white fluffy kitten. The lawyer even went so far as to assure the judge that he was not a cat and said, “Can you hear me? I’m here live. I’m not a cat.”

The video that is now gone viral was released by the judge to offer a warning to everyone that they should check their computer before attending a hearing. In his tweet he said, “If a child used your computer, before you join a virtual hearing check the Zoom Video Options to be sure filters are off.

“This kitten just made a formal announcement on a case.”

The judge also assured people that he had released the video for educational purposes and tweeted that, “It is crucial to me that this not be couched as poking fun at or belittling the lawyer, but noting that it goes hand-in-hand with the legal community’s effort to continue representing their clients in these challenging times, and at the incredible professionalism and dignity displayed by all involved.

“Texas judges have now held over a million virtual hearings, so you can imagine that we’ve seen it all.

“It just exemplifies what we’re all living with, you have to roll with the punches.

“Obviously it was amusing but if you watch carefully you’ll see that everyone was extremely professional.

“Everyone involved handled it with dignity, and the filtered lawyer showed incredible grace. True professionalism all around!”