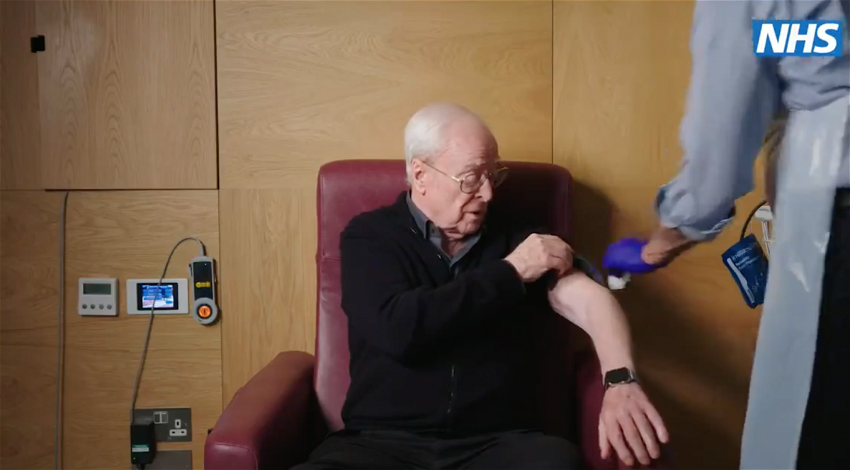 SIR Elton John and Sir Michael Caine, aged 73 and 87, have starred in a video from the UK National Health System (NHS) encouraging British people to get vaccinated to “eradicate the COVID pandemic.”

The video shot at London’s Chelsea and Westminster Hospital aims to “show others that getting the life-saving jab is easy and safe,” according to a statement.

The campaign video, marked with a touch of British humour, consists of Elton John appearing at a casting appearance where he has to pretend to get a vaccination.

After apparently being given the injection, singer Elton John then references his 1983 hit I’m Still Standing by saying: “As you can see, I’m still standing, yeah, yeah, yeah.”

The director then responded by saying: “Thanks Elton, we will let you know.”

Sir Elton replied: “Well at this short notice you won’t find anyone bigger.”

The video then cuts to actor Michael Caine as he appears to be given the vaccine.

The actor said it “didn’t hurt” before saying: “Not many people know that.”

In the advert to promote vaccinations, Elton said: “The more people in society that get vaccinated, the more chance there is of eradicating the national Covid pandemic.

“It is really important to know that the vaccines have all been through and met the necessary safety and quality standards.”

Thanks @eltonofficial and @themichaelcaine for encouraging people to get the #COVIDVaccine. (Sorry it didn't quite work out, Elton.) 😬 pic.twitter.com/m0BIzKIu1b

Almost 13 million people have already received the first dose of the vaccine in the UK and half a million of them have received the second.

The coordinator of the campaign, Professor Lord Ara Darz, via the NHS, has used two of the most iconic British figures to try to dispell any fear and encourage the British public to participate in this campaign to support vaccinations and fight against the virus.

Lord Ara Darz said Sir Elton and Sir Michael are “trusted faces” who are “loved” by the public.

“I asked them [to take part] and they were extremely generous in giving us the time to do this, which I was very grateful for, and I hope it does the job in convincing the population that vaccines for Covid is the best way out of this pandemic,” he said.