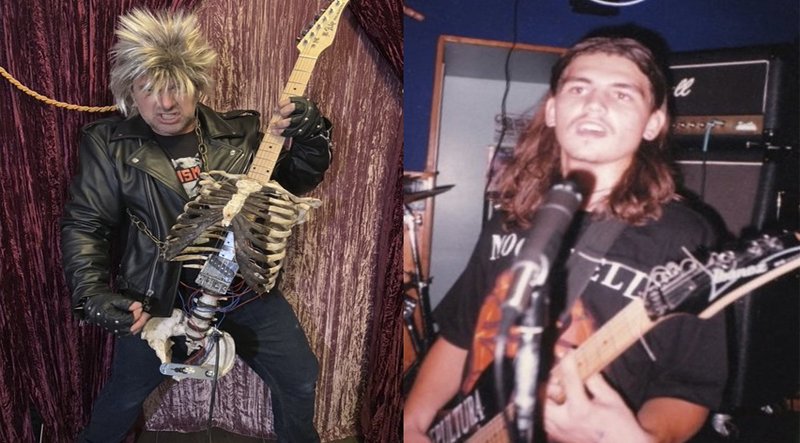 A Greek rock musician, Yaago Anax, living in Tampa, Florida, who goes by the stage name of Prince Midnight, has paid the ultimate tribute to his dead uncle – who was also a heavy metal rock musician – by using his bones to build a unique electric guitar!

Yaago’s uncle Filip was tragically killed aged only 28, in a car crash in the 1990s in Athens, Greece, and had been Yaago’s reason for wanting to become a rock musician, so he thought what better way to bring him back to life than in the form of a rock guitar.

He explained to the Daily Star Online how he came to be in possession of his uncle’s bones, “He originally donated his skeleton to the local college and was medically prepared for the school. After 20 years, he ended up in a cemetery my family had to pay rent on. Like, literally in a wooden box, it’s a big problem in Greece because orthodoxy religion doesn’t want people cremated”.

He continued, “So, I went through the channels to repatriate his remains over here in Florida. I got the box of bones from Greece and didn’t know what to do at first. Bury them? Cremate them? Put them in the attic? All seemed like poor ways to memorialise someone who got me into heavy metal. So, I decided to turn uncle Filip into a guitar, which proved to be challenging”.

Yaago’s local guitar shop found the idea too creepy, so he decided to build the ‘skeletar’ himself, “Now uncle Filip can shred for all eternity. That’s how he would want it. I’m super proud of the project and how it serves to honour him, his life and his influence on me. My mother would prefer him be buried, she is Greek Orthodox but admits he would probably be happier as a guitar”.