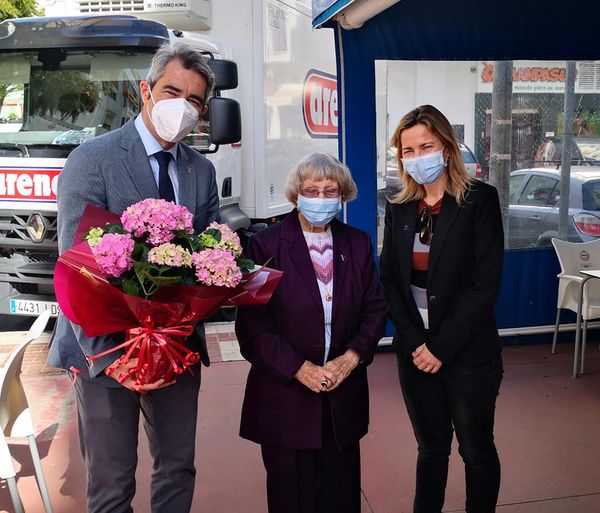 Happy 100th birthday to the Costa del Sol’s Ivy Rhodes.
THE much-loved and integral part of the Benalmadena community has been treated to a birthday to remember, despite the pandemic.
Ivy Rhodes was born on February 11, 1921, in Dudley, and made the popular coastal town her home after snapping up an apartment in Benalmadena 40 years ago.
Since then, she has thrown herself into clubs and great causes and is now a hugely loved member of the local community.
So much so, that Mayor, Victor Navas, was determined not to miss out on the opportunity to wish the centenarian a happy birthday.
Pictures posted on Facebook show the mayor presenting Ivy with a beautiful bouquet of flowers along with a touching card.
An avid traveller in her youth, Ivy loved island hopping but was also a huge fan of southern Spain, and so decided that is where she would settle.
According to Benalmadena for Residents Facebook page, Ivy joined many clubs, the Merry Go Round, Social Club, Eagles Club and (the now) Age Care, determined to make friends.
“Ivy is a much loved and recognised figure in and around Arroyo, always available if anyone needs her help, she loves to eat out which she does most days at Domandas, and loves to dine out in the evenings, followed by a little tipple in her nearest bar Rincon Mary.
“In the absence of Covid, her intention was to throw a large party 100 persons plus, to have a ‘knees-up’ and say thank you to all her friends for their kindness and friendship over the years.
We do hope Ivy will be able to make a big celebration once the pandemic is over,” said friends on the Facebook page.
Ivy Rhodes was born in Dudley Worcestershire and after leaving school, went to work for Newey Bros. Haberdashery makers in their box making room.
When WWII broke out because she had a secretarial education she was transferred to their munitions factory as a progress clerk and stayed until the end of the war.
She returned to the box room and became the head, aged 26.
Ivy moved to London in 1947 where she worked for Columbia Pictures for 11 years, developing a love for the theatre.
Her favourite actor was the great Ivor Novello, a photo of whom she still has in her apartment.