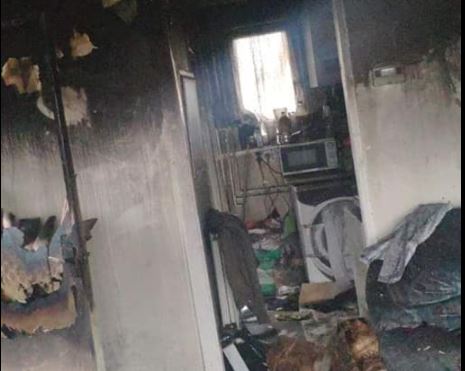 If it had not been for Bella the puppy an Alford woman and her family would probably not have survived a house fire that left the house decimated. Bella is a one-year-old Jack Russell puppy and on Saturday, February 6 she managed to wake her owner with frantic barking.

Diane Thompson Bella’s owner got out of bed to check what the puppy wanted, only to find that the house was filled with smoke and her life was in danger. A fire had broken out downstairs, in the under stairs cupboard due to an overloaded plug socket.

Diane spoke about the horrifying night and said, “Initially when I heard Bella barking, I thought she had spotted a cat or something outside,

“I hushed her and tried to get back to sleep, but she carried on barking.

“At this point, I was getting a bit irritated but thought now I’m awake I may as well use the loo, so I went downstairs.

“When I got into the living room, I found it was filled with smoke.

“I went over to the cupboard under stairs as that was where the smoke was coming from and found that the plug socket had caught fire.

“I think I said one or two choice words, but I didn’t panic.

“I just called 999 and woke up my son and his partner, who are staying in the caravan outside.”

Diane who does not have any house insurance is being helped out by her local community and the Alford Storehouse Church and Foodbank set up a fundraiser too. Alford Storehouse’s Barbara Deeth said, “The community church has been around for many years and when things like this happen, we get stuck in and help as much as we can.

“When we heard about the fire, straight away we took out some emergency clothing and food.

“I know that Diane has been given some temporary accommodation.

“What’s needed now is any donation to help her get her house sorted.”

Bella truly was her owner’s best friend that night.