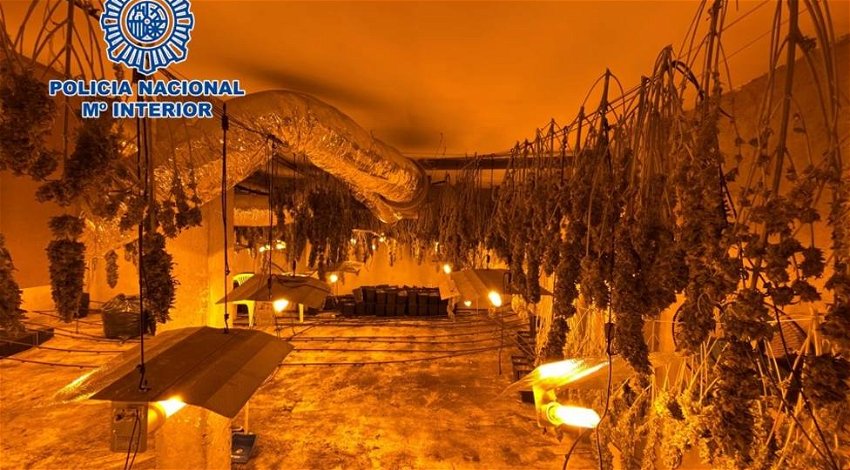 The Policia Nacional in Motril has broken up two large-scale marijuana plantations and in the process seizing 586 plants and arrested three women and one male in the towns of Durcal and Motril.
Officers had initiated investigations after receiving a tip-off about the existence of the two plantations inside buildings in two separate locations, which were soon discovered, and, putting surveillance operations in place at both points the officers waited for their opportunity to identify and apprehend the suspects.
The first bust came on a house in the Varadero district of Motril, where the officers discovered 178 marijuana plants being cultivated in two rooms, on two floors of the property, both fully-equipped with the necessary materials for growing such plants.
The plant below had one of these rooms in which the agents found 147 plants in different stages of growth and flowering. On the second floor of the building, 31 plants were seized in the room prepared to house them.
Then, one week later, as part of ‘Operation Arrayán’, after months of staking the property out, officers entered and searched the second property, in Durcal, where they discovered a basement again fully-equipped, where they found 408 cannabis sativa plants that had already been cut and were in the drying process.
Also seized was 12,470 euros in cash, in the possession of one of the investigated women, and subsequently arrested two women aged 33 and 34, along with a male aged 35, on suspicion of harvesting the marijuana plantation.
The suspects are also charged with fraudulent use of an illegal electrical installation, using a supply that was found to be by-passing the ENDESA meter.
_______________________________________________________
Thank you for taking the time to read this news article “Motril Police Arrest Four Involved In Large-Scale Marijuana Plantation Operation”.
For more UK daily news, Spanish daily news and, Global news stories, visit the Euro Weekly News home page.