NOT IMPRESSED by new attempts to beat us down 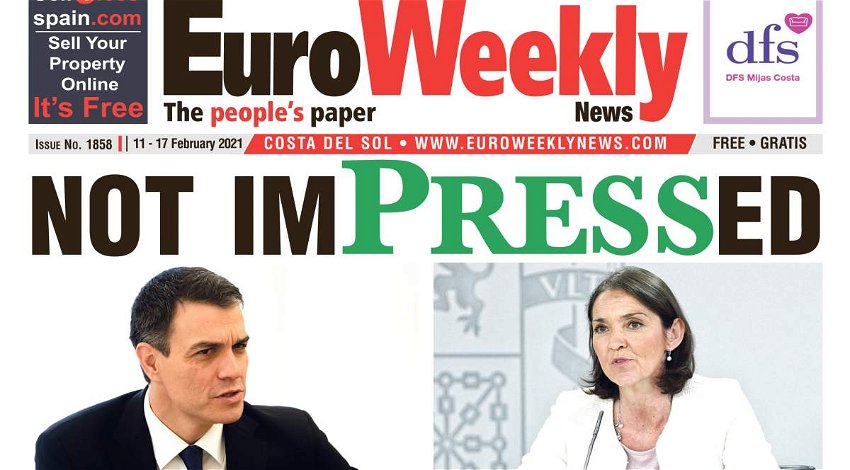 ONCE again the Euro Weekly News – your community paper – has been forced to react to yet another attempt by an English-speaking newspaper in Spain to damage our family business.
In recent months – it’s hard to believe we’re actually talking nearly a year since our first national lockdown here in Spain – it’s been rather difficult to find the good news stories that we’re all desperate for.
It’s been even more difficult to decipher the real news from the misleading, sensationalising, or even downright false.
But here at EWN, we believe our readers are entitled to ALL the news – that means the good, the bad and the ugly.
But in doing this, we have come under fire again from the Olive Press over an article in which Spanish President, Pedro Sanchez revealed on January 19 that “only mass vaccination will open the path to the normality we want.”
He added, “The government is working to administer vaccines at the fastest rate possible, in fact, Spain is the ninth country in the world in vaccinations and one of the first in Europe, in order to get to the end of the summer with 70 per cent vaccinated, which will progressively allow Spain to be better prepared to receive international tourists.”
This statement, made at a meeting of the Executive Council of the World Tourism Organisation, with the understanding that this meant that Spain would not be prepared to receive foreign tourists until the end of the summer, was published far and wide by the Spanish press.
It was also reported by business associations, especially in the tourism sector, along the same lines as EWN, as we firmly believe that it is of utmost importance for us to provide accurate translations of the important news in Spain so that our expat readers are always well-informed.
His words caused alarm throughout Spain with the hospitality sector fearing that the statement would scare away visitors and saying that they would not be able to overcome another summer like last year.
In an obvious attempt to repair the damage caused by Sanchez’s words, within days, the Minister of Tourism, Reyes Maroto, said that for the government, “the priority for 2021 is to reactivate tourism and restart safe movement at a global level as soon as possible” adding that the government hoped this would be possible by the end of the spring.
She said “we hope that by the end of the spring and especially during the summer, international travel will have restarted and travellers choose Spain as their destination.” By then, she pointed out, around 30 to 40 per cent of the population should have received the vaccine.
During her speech, the Minister did not specifically mention what Sanchez had said, but simply pointed out that the aim of the government is to get back to normal before summer.
Again, EWN accurately reflected what was reported in the Spanish press, as our priority is, and always has been, to keep our readers informed of what is going in the country where they have chosen to live.

Following the President’s initial declarations, national Spanish daily La Razon, went as far as to say “Sanchez writes off international tourism until the end of the summer,” while OK Diario said that “the most recent statements from Sanchez and Simon have led to cancellations.”

However, the Olive Press has taken it upon itself to accuse EWN of publishing false news, even going so far as to imply we were responsible for a ‘slew of holiday cancellations as a result of the article.’ We believe that this is just an attempt by them to try and gain themselves much needed credibility while attempting to damage a fellow publisher. Some would call it a cheap shot!
We do not go out of our way to damage the local businesses or in any shape or form attempt to push firms to the brink of bankruptcy.
Why would we? We are nothing without our clients, our readers and the communities we are proud to be at the heart of.
Sanchez said it like it is! We may not like it but it’s our duty to report the news, as did the rest of the Spanish press.
We want the vaccines as much as the next person – both as residents and taxpayers of Spain along with our Spanish contracted staff. It is something that we all feel very strongly about.
It is also important to point out that while they are now attacking EWN, the Olive Press ALSO ran the same story!

Not only did they run the same story, they took a far more pessimistic approach to the news.
‘Spain unlikely to receive foreign tourists en masse until end of summer in dire news for tourism bosses following €106 billion losses in 2020.’

The article cited mammoth losses, a 70 per cent slump in tourism – the lowest in 20 years – and predicted year-on-year losses in turnover of around 80 per cent in the first quarter of 2021.
The Olive Press is supposedly known as the green paper, however, it has also been called a ‘yellow paper’ by a judge after being reported and investigated by FAPE for ‘harassment’ tactics used towards families during the coverage of the Maddie McCann story.
The newspaper also launched an unsubstantiated attack on businesswoman Jody Smart of the Oceana Club, Benissa.
She was tried by the paper having only appeared in court to give summary information.
She has not been convicted of any crime and there is no certainty the case will ever be pursued in a court of law.
Jody told EWN: “He’s just an absolute joke, once again a pack of lies, they are FAKE.
“I’ve had four years of them attacking me, ruining my reputation and trying to discredit me.
“I despise them… because people do take their own lives from this sort of media hate campaigns. I am one of the lucky ones who is still here to tell the tale.”
Jody and husband Franco are looking into taking legal action against the publication.
The Olive Press took no time in attempting to sully the memory of a longstanding, respected member of the community who was active amongst many charities throughout Spain, David Klein, aka David the Dog Man.
Within four days of his dying, they referred to his wife as ‘long-suffering,’ and she was forced to assure she had enjoyed 60 years of happiness with her husband.
But even after his death, the paper insisted on continuing to hurt the couple with their allegations.
These are but a few examples of persecution of the innocent who either cannot or are unable to defend themselves!
We Support everybody, but the Olive Press is NOT green. Green is the colour of rebirth and new beginnings, not the rehashing of the past with poetic licence in reporting.
#STANDUPTOBULLYING