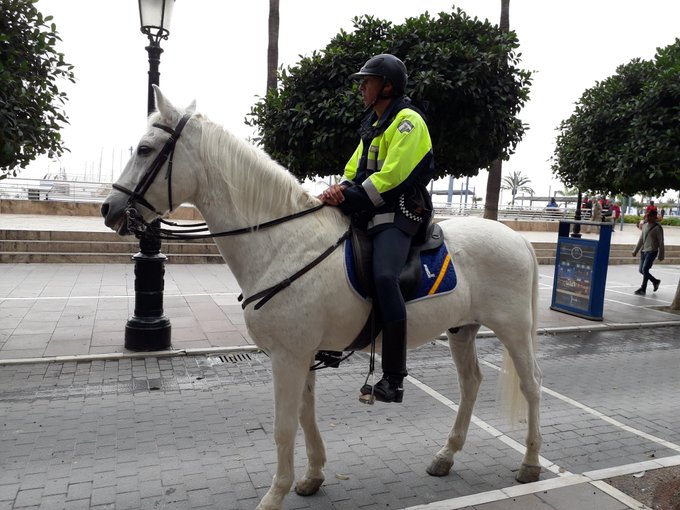 MASK rule flouter bites a mounted police officer in Spain’s Marbella
It’s been quite a week for anti-maskers showing their disdain for the regulations in the Costa del Sol, but one unfortunate police officer got a face-full when he tried to enforce the rules. The officer in question was patrolling Avenida del Mediterráneo on horseback, along with a colleague, when they spotted a man strolling down the street without a mask. When the Police approached the rule-breaker and asked him to put his face shield on, the flouter became aggressive and grappled with the agent.
A passerby filmed the bazaar scene, and commented on what was happening.
“I think he does not want to put the mask on, he is saying that the pandemic is not true. I am filming because I am in favour of the police,” the woman said.
During the ensuing struggle, the man somehow managed to bite the police officer, causing a large gash on the inside of his lip. With the help of a member of the public, the attacker was eventually subdued and arrested, but not before insisting that he wanted his “freedom” and that he is “not a criminal, wearing the mask all day is bad.”
On the same day, February 12, Local Police officers were patrolling near the Victor Beach area of Marbella when they noticed two men, who later turned out to be brothers, strolling down the street, also without masks. When the officers advised them that mask-wearing is mandatory and a matter of public safety, the two men took exception and a scuffle ensued.
Police officers were eventually able to calm the situation and the brothers were arrested for attacks on authority and resisting arrest.
________________________________________________________________________
Thank you for taking the time to read this news article “Mask Flouter Bites Police Officer In Spain’s Marbella”. For more UK daily news, Spanish daily news and Global news stories, visit the Euro Weekly News home page.