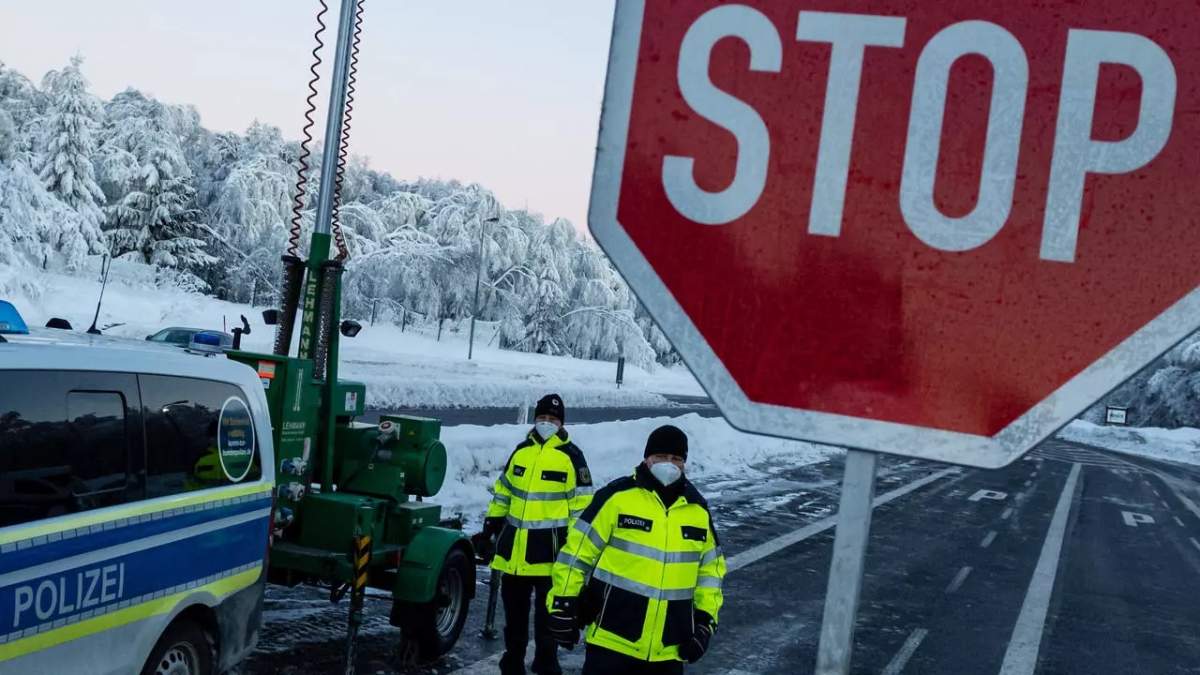 GERMANY partially closed its borders with the Czech Republic and Austria’s Tyrol today, Sunday, over a troubling surge in coronavirus mutations was reported across the country. The move immediately attracted a swift rebuke from other European Union member states.

It is understood that more than a thousand police officers have been mobilised to ensure strict border checks, which recall the much-criticised early days of the pandemic when EU countries hastily closed their frontiers to each other.

At the Kiefersfelden crossing in southern Bavaria, officers in yellow high-visibility vests and wearing balaclavas to stave off the chill in -15 degrees Celsius (5 degrees Fahrenheit), were seen meticulously stopped each vehicle coming from Austria.

Under the new rules, in place until February 17, only Germans or non-German residents are allowed to enter, and they must provide a negative coronavirus test taken within 72 hours before appearing at the border.

Some exceptions are allowed for essential workers in sectors such as health and transport, as well as for urgent humanitarian reasons, the interior ministry has said. German rail company Deutsche Bahn has suspended services to and from the affected areas.

At Frankfurt airport, the country’s largest, federal police were today, Sunday, checking all passengers arriving from Vienna and Prague. The restrictions are aimed at slowing the spread of new, more contagious variants that first emerged in Britain and South Africa, and have created new virus hotspots along the Czech border and in Austria’s Tyrol region.

The European Commission, eager to avoid a return to go-it-alone pandemic responses, has condemned Germany’s newest restrictions and urged it to facilitate cross-border movement for commuters.

“The fear of the coronavirus mutations is understandable,” EU Health Commissioner Stella Kyriakides told Germany’s Augsburger Allgemeine newspaper on Sunday. But the truth is that the virus cannot be stopped by closed borders,” she said, adding that vaccines and following hygiene precautions were “the only things that work”. “I think it’s wrong to return to a Europe with closed borders like we had in March 2020,” she added.

“That’s enough now, the EU has made enough mistakes with its sluggish vaccine rollout, he said. We are fighting against the mutated virus at the Czech and Austrian borders. The EU Commission should support us… instead of putting stones in our path.”

Chancellor Angela Merkel’s government recently decided to extend Germany’s partial lockdown until March 7 because of the risks posed by the variants, even if daily infection numbers have fallen over the past weeks.

In the Czech Republic, one of the hardest-hit countries in Europe, three cantons including two on the German border have been placed under lockdown due to the prevalence of the British virus variant.

In Austria, anyone leaving the mountainous region of Tyrol now needs to produce a negative coronavirus test following a cluster of cases linked to the highly transmissible South African variant.

Tyrol has allowed ski areas to remain open, supposedly for locals, but there has still been an influx of foreign skiers into the area. Bavarian premier Markus Soeder said he feared that “a second Ischgl” was in the making — a reference to the Austrian ski resort that became a Covid-19 hotspot last year and contributed to the virus’s spread across Europe.

“Even though these virus variants are already circulating in Germany we need to prevent further intrusion as much as we can,” said the interior minister of the Baden-Wurttemberg region, Bavaria’s neighbour.