Controversial rapper locks himself in university to avoid jail 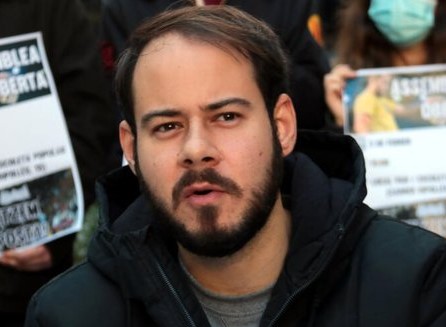 Controversial rapper locks himself in university to avoid jail having been sentenced to almost three years in prison for ‘glorifying terrorism’ through his music.

PABLO Hasel should have begun his sentence on February 13 but has barricaded himself inside the University of Lleida with a group of friends.

The deadline for voluntary entry into prison expired on Friday, February 12, meaning the authorities have to force the arrest.

The musician known as Valtónyc had assured he would not leave the country after being convicted of ‘exalting terrorism and insulting the Crown and State institutions’, but warned he would not ‘voluntarily go to prison’.

And it appears he has been true to his word, locking himself in the university rectory this morning, Monday, February 15, and his whereabouts was made known on Twitter by members of the Llibertat platform Pablo Hasel.

Hasel is said to be with a large group of young people who “support his cry out for his freedom”.

“I am locked up with quite a few supporters at the University of Lleida, they will have to burst it to arrest and imprison me,” he later tweeted himself.

In a statement, the university confirmed students and “interested persons” can enter and leave the campus “without problems since access to the university is open as it is considered a public space”.

However, the press office did state that the university “had no knowledge of Pablo Hasel’s intention and do not know why he went directly there”.

Hasel was sentenced for tweets and the lyrics of a song about King Emeritus titled Juan Carlos el Bobón.