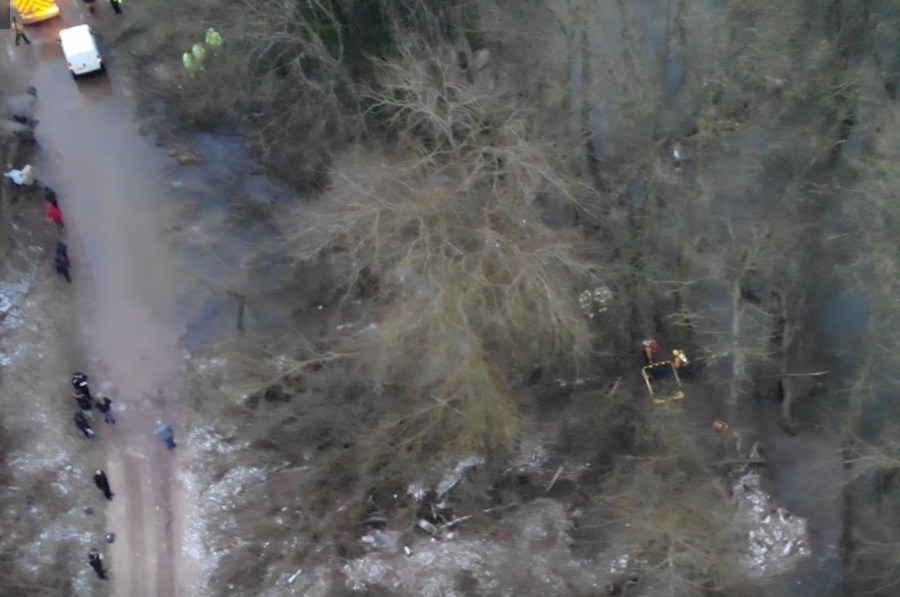 Two 11-year-old girls had a lucky escape after walking over a frozen part of the River Trent and becoming trapped.

One of the girls fell through the ice into the freezing water before the alarm was raised by a passer-by.

The other made it to an island but was stranded with no way back over the broken ice.

Drone footage capturing the dramatic moment one of the girls was brought to safety has been released today by Nottinghamshire Police in a bid to highlight the dangers of entering the River Trent, especially when it is icy.

The incident was just a few hundred metres away from the area where 12-year-old Owen Jenkins tragically died after being dragged under by a strong current while trying to rescue two friends who had got into difficulty in the water at Beeston Weir in July 2017.

A joint rescue operation was launched by Nottinghamshire Police, Nottinghamshire Fire and Rescue Service, and East Midlands Ambulance Service to rescue the girls and bring them to safety after the incident was reported, near to St Mary’s Church, Holgate, at around 4.45pm.

The first girl was able to be supported in walking out of the water as she was closer to the edge, however, to rescue the second girl, crews had to use an inflatable piece of equipment called a pathway to bring her safely back across the frozen water.

The girls – who were unharmed but extremely cold – were then left in the care of the ambulance service.

Nicola Jenkins, who founded the Open Water Education Network (OWEN) water safety program in her son Owen’s memory after his death, urged children to stay away from the River Trent and for parents to speak to their youngsters about the dangers.

“When it comes to ice children don’t seem to see the danger. They just think it is a bit of fun,” she said.

“A lot of the ice looks thick but it isn’t. Where the water is shallow it can be thick but when it gets deeper it is thin and that’s where the difficulty lies and you can become stranded.

“There is no point even trying it because we don’t have thick ice like in some countries. It is best to stay away – it is not worth the risk.

“Parents need to be more open with their children and explain the dangers of open water and ice in cold weather. Even on the hottest days, the water is really dangerous but cold water shock can be really quick to take hold.”

Mrs Jenkins also urged people to download the What3words app which can pinpoint a location for emergency services to find people when they get stranded.

Chief Inspector Duncan Southall, of Nottinghamshire Police, said: “The girls are extremely lucky to have been unharmed, particularly as one of them had fallen into the water through the ice.