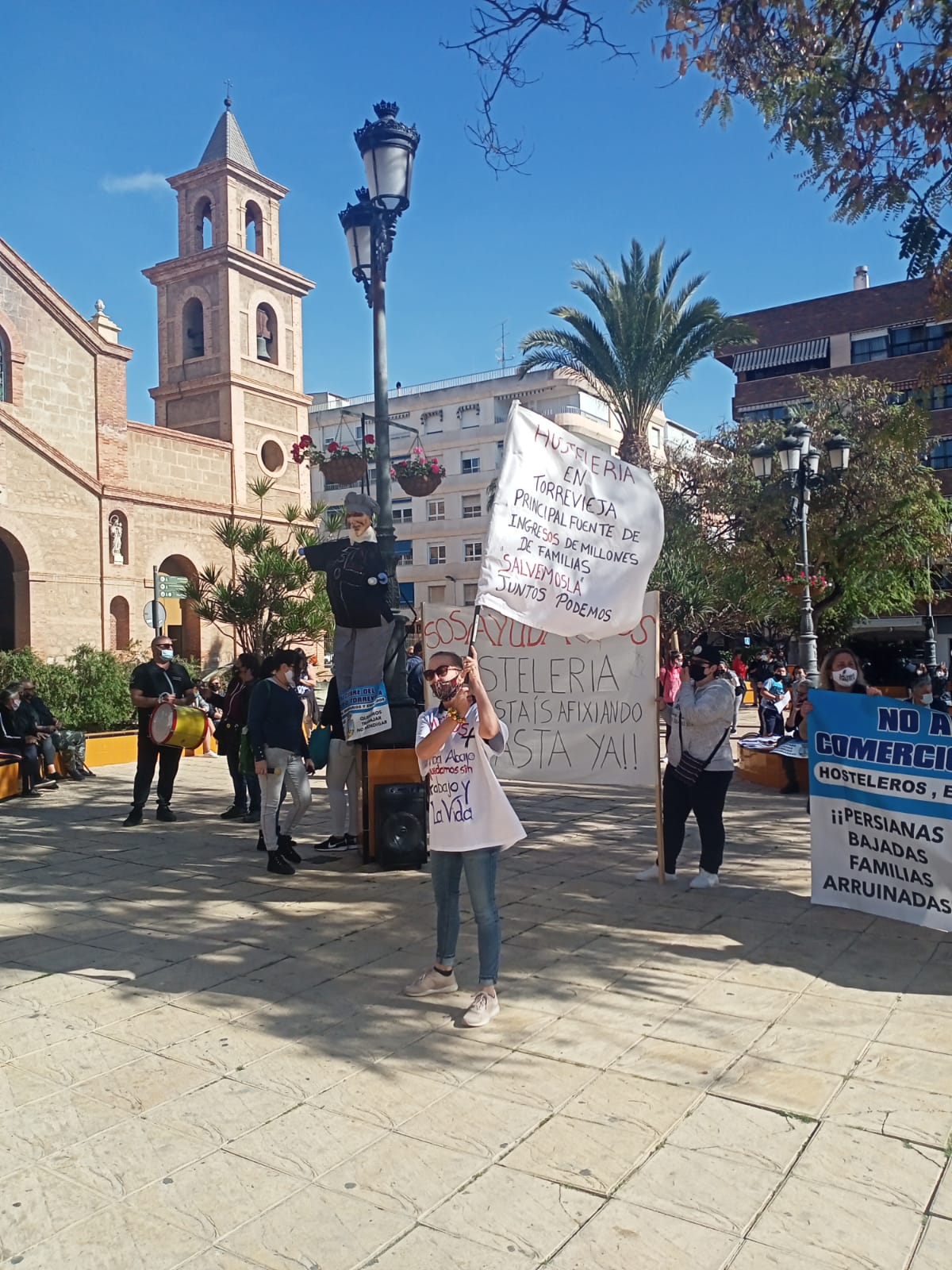 Large Turn Out for Torrevieja Hospitality Protests as Mayor and Officials Stay Away.

A TURNOUT of around 150 people joined the protests today (February 16) in Torrevieja as hospitality workers in Spain’s Valencian Community peacefully demonstrated against government restrictions. These restrictions have seen all bars and restaurants closed, a move which the hospitality sector see as unnecessary.

EWN was on site as people met in the plaza outside the front of the town hall, which had a dummy of a chef hanging from a lamppost directly across from it, to try to get the local government to listen to them.
Many of the 150 people were Torrevieja hospitality workers who want Ximo Puig, the president of the Valencian government, to know that they believe bars and restaurants aren’t the cause of the spread of Covid and that the government is providing too little aid, too late.

Among the upbeat atmosphere, with people singing and clapping, there was no sign of the mayor or any officials, although there were a few local police stationed at the door of the town hall, who didn’t come near the plaza.

This isn’t the first time protestors have taken to Torrevieja. On Sunday, January 24, dozens of cars flooded Torrevieja’s main thoroughfare, honking their horns in an attempt to draw the attention of the regional government.
One protestor told Euro Weekly News on that day: “It was a great success. People were lined up and down the streets, standing on their balconies and applauding us as we passed. There was a great sense of goodwill.”
On February 11, Ximo Puig announced that the region will extend all of its current Covid restriction measures until March 1, stating that a “rapid de-escalation” of restrictions would be off the table until the rate of infections dramatically drops.
However, he did state at the time that Covid hospitalisation rates were down in February, taking the opportunity to thank the region’s residents for their “collective effort to save lives”.
Earlier that day, hoteliers from the provinces of Alicante, Castellón and Valencia lined up in front of the Palace of the Generalitat of Valencia to demand the reopening of their businesses and the extension of the Resistir Plan with €500 million for a sector that has accumulated 11 months of restrictions and closures.

Thank you for taking the time to read this news article “Large Turn Out for Torrevieja Hospitality Protests as Mayor and Officials Stay Away”. For more UK daily news, Spanish daily news and Global news stories, visit the Euro Weekly News home page.