Rapper arrested after barricading himself in university to avoid jail 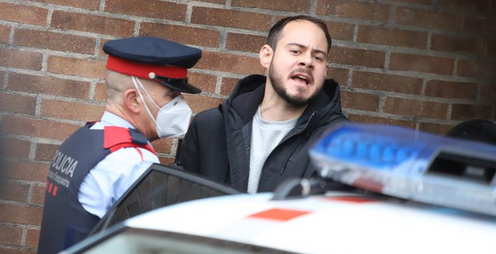 Rapper arrested after barricading himself in a university to avoid jail.

PABLO Hasel was led away from Lleida University at 8am this morning by Barcelona police, the Mossos d’Esquadra, after locking himself away with dozens of supporters yesterday, Tuesday, February 15.

The musician known as Valtónyc should have begun a two-year and nine months sentence on February 13 after being convicted of ‘exalting terrorism and insulting the Crown and State institutions’.

He had warned he would not ‘voluntarily go to prison’ and, true to his word, barricaded himself in the university rectory.

His whereabouts were made known on Twitter by members of the Llibertat platform Pablo Hasel supporters group.

But at 6.30am this morning, police swooped on the university and the rapper’s supporters were dispersed one by one.

But it didn’t go smoothly, and a small group tried to resist being led out of the university, setting off several fire extinguishers.

After almost two hours, Hasel was arrested, without violence, although he refused to sign an arrest document.

Dozens chanted for the musician’s freedom as he was driven through the university gates.

And the Minister of Consumption, Alberto Gazón, also voiced his anger at the arrest.

He tweeted: “Today a singer has been arrested and will be taken to jail after being convicted for some tweets. This is a symptom of serious democratic deficits. And those who deny it do a disservice to what does work well in Spanish democracy, which is also a lot.”

The Podemos account tweeted: “The rapper Pablo Hasel is being arrested. All those who boast of this ‘full democratic normality’ and consider themselves progressive, should be ashamed. Will they cover their eyes? There is no progress if we refuse to recognise the current democratic deficits”

The singer will spend between two and five days in the prison admissions module before being transferred.

Thank you for taking the time to read this news article “Rapper arrested after barricading himself in university to avoid jail ”. For more UK daily news, Spanish daily news and Global news stories, visit the Euro Weekly News home page.