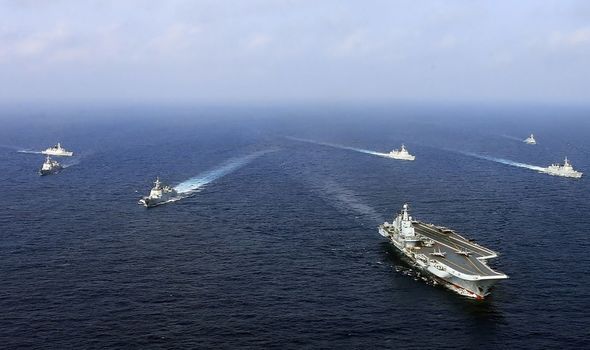 CHINA has risked sparking war tensions after it despatched ships into Japanese waters as part of a longstanding dispute with the nation.

China has reportedly sent two vessels into the waters near the Senkaku islands as it bids to spread its territorial claims. The islands have been claimed by both China and Japan over the years and have long been disputed.

The Japanese government has now lodged a complaint with China over the incursions and demanded the ships leave the area immediately. It is thought today’s incursion is the seventh already this year.

Although the two ships left after being warned by the Japanese government, it is the latest show of force from Xi Jinping. Ministers from the UK and Japan have previously voiced their concern over China’s increased military presence in both the East and South China Seas.

In a statement earlier this month from Foreign Secretary Dominic Raab, Defence Secretary Ben Wallace and Motegi Toshimitsu Minister for Foreign Affairs of Japan and Kishi Nobuo, Minister of Defence of Japan, the four issued their concern over the region.

They said: “The four Ministers expressed serious concerns about the situation in the East China Sea and the South China Sea and strongly opposed any unilateral attempts to change the status quo and increase tensions.

“The four Ministers reaffirmed the importance of upholding freedom of navigation and overflight above the South China Sea and urged all parties to exercise self-restraint and refrain from activities likely to raise tensions, in particular militarisation and coercion.

“They emphasised the importance of peaceful resolution of disputes in accordance with international law as reflected in the UN Convention on Law of the Seas (UNCLOS) that sets out the legal framework within which all activities in the oceans and seas must be carried out and that all maritime claims must be based on the relevant provisions of the UNCLOS.”

The Biden administration has yet to respond to the Chinese incursions and a statement is expected soon. Please check back for the update.