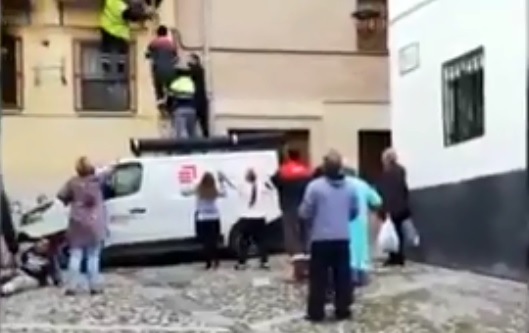 A COUPLE is facing 12 years in prison for setting fire to their home in Jaen to claim the insurance money.

According to expert reports, they set three fires in the house in the city centre not long after taking out house insurance. They allegedly planned to claim for damages but the fire got out of hand and they got stuck in the house.

Workmen who were in the area placed their van under the balcony with a ladder so that people could get out of the house, but some couldn’t wait and jumped out.

Two women got out, but when the man, who weighed more than 150 kilos attempted to get down, the ladder broke and fell on one of the workmen.

Five people were injured in the fire. One of them fell from the house on the second floor, which has now been illegally occupied by relatives of the accused who claimed €7,300 from the insurance and are accused of causing bodily harm and fraud.

They deny having set the fire in the home where they lived with their five children and claim they don’t know how it started.

The woman, 38, said in court that they were offered house insurance and they accepted it, but that it was not related to the fire. She claims that she went to take the children to school, and when she got back, there was smoke coming from her house.

However, the insurance agent claims that the woman, and her husband, aged 45, asked for the insurance. They were living in the house free of rent as it was provided for them by the state. Neither of them was working, yet they took out the insurance.

The public prosecutor is asking for a €90 fine and €80,134 compensation for the victims.