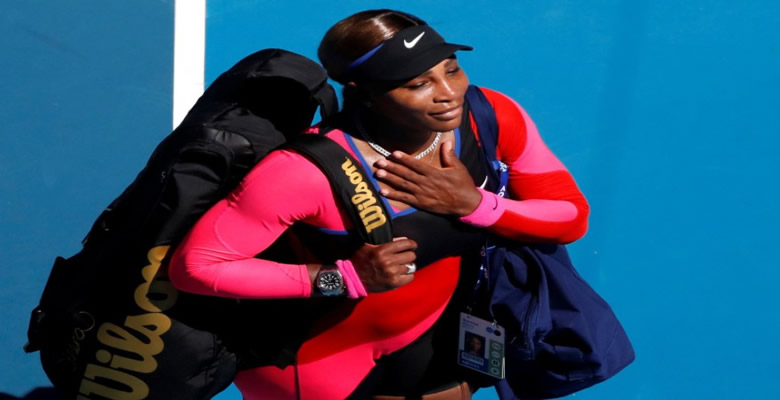 Legendary female tennis star, the 39-year-old Serena Williams, is out of the Australian Open in Melbourne, losing her semi-final against Japan’s No3 seed, Naomi Osaka, in straight sets, and now Osaka will meet first-time Grand Slam finalist Jennifer Brady in Saturday’s final.

Williams is one Grand Slam title short of equalling Margaret Court’s incredible total of 24 titles, and this defeat means she has not reached any final in 18 months, and as she left the court Serena placed her hand on her heart and waved to the crowd, prompting speculation that this could have been her final appearance in Melbourne Park, where she has won seven titles.

Her press conference after the match was an emotional affair, when asked about her future she simply said, “If I ever say farewell, I wouldn’t tell anyone. So…”, but it was the next, innocuous question about the unforced errors during the match that brought the reply, “I don’t know. I’m done,” becoming teary-eyed, shaking her head, and abruptly leaving the room.

Osaka, aged 23, made an amazing recovery from being  2-0 down she won eight out of the next nine games, wrapping up a victory in just 75 minutes., saying on-court afterwards, “I was really nervous and scared in the beginning but I eased my way into it”.

She continued, “It was about having fun, and it was the first day having a crowd for a while. It’s an honour to play her and I didn’t want to go out really bad so I just tried my best. I was a little kid watching her play so coming up against her on the court for me is a dream”.

Thank you for taking the time to read this news article “Serena Williams Leaves Australian Open In Tears After Losing”.